In New York, everyone is in a rush. "The New Yorki Minute" defines a state of mind shared by most New Yorkers; it distinguishes them from the rest of the world.


Legend has it that the term originated in Texas around 1967. New Yorkers were credited with doing in a second what Texans would do in a minute. Johnny Carson described it as the interval between a Manhattan traffic light turning green nd the guy behind you honking his horn.

The Eagles wrote a song about it.

God forbid that anyone keep you waiting in New York. For more than forty years, I have had a 98% on time rating. If and when I am running late, like everyone else, I call. Depending on whatever your status within whatever heirarchy to which you might belong, you are allowed a five to fifteen minute window. If you are stuck in a cab in midtown, you can get out and walk or run. If you are stuck in a subway, you can't call and you have no options. If you're stuck in a tunnel or on the FDR or Wst Side Highway, it is like being stuck in the sunway. You sweat it out and hope that you have not ruined whatever opportunity might have been waiting for you.

In LA, I have yet to hear anyone say, "I'm in a hurry." No one seems to worry if you are not on time. A freeway traffic jam or accident is always a good excuse and it probably is treue. In 1947, Evelyn Waugh gave a true Brit's evaluation of the Angelenos' sense of time saying that: "it's not the leisure of Mone Carlo or Palm Beach where busy men go for a holiday. It is the leisure of those whose work is quite finished. Here on the ultimate sunset shore they lay themselves down, warm their old limbs and open thsir scaly eyes three times a day to browse on lettuce and avocado pears."
Posted by Allon Schoener at 7:30 PM 0 comments

On Becoming an Angeleno 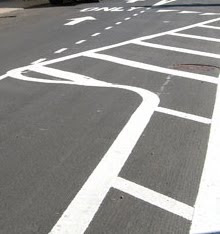 After three months in LA, I had my first automobile accident. Having driven in New York for more than sixty years, I hve never had an accident. I have had a lot of parking tickets and was once caught in a trap for failing to have my seatbelt connected. I have driven all over Europe, including the left side of the road in the United Kingdom, and on the Autostrade in Italy from Trentino in the North to Siracusa in Sicily. No accidents.

On learning of my accident, one friend said, "Now you're an Angeleno!" Another daid that she had three accidents in the last year, none of which were her fault. Based on my brief exposure to driving in LA, can I say that LA drivers are worse than New York drivers. My emphatic answer is "Yes."

As it runs our statistics might deny my assessment. A 2008 Automobile Club of Southern California study shows that LA/OC traffic crashes cost nearly $11 billion annually. The report states taht, "The Los Angeles/Orange County metropolitan area has the highest 'cost of congestion' and the second-highest 'cost of crashes among all metropolitan areas in the U.S. The highest cost of crashes annually is the metropolitan
area encompassing New York City, Newark, N.J." Who needs statistics when you have attitude?

To get arounrd LA, you need to drive on both the freeways and the streets. On the freeways, you may be traveling at 65mph or stuck in traffic for half an hour or more. Google Maps indicate that a trip from our place in Boyle Heights to downtown Santa Monica is approximately 20 miles and that it can take 26 minutes on the freeway in good traffic and 90 minutes during the rish hour. I have done it twice recently
averaging 25 minutes each way in non rush hour traffic.

On a recent weekend, my wife and I were driving in Santa Monica on Main Street. There were two cars ahead of us. The first ones topped suddenly as a pedestrian darted into a crosswalk. The second one slammmed into the first. In California, pedestrians ahve the right of way. If this had occurred in New York where "jay walking" is accepted social behavior, though not legal, the first car would have proceeded to drive around the pedestrian and avoided being hit from behind. Since I am an inveterate jay walker, I was sympathetic to the driver in the first car.

Everyone characterizes LA drivers as aggressive and fast. Add the insane street marking like the one shown above. Whenever you go on the streets, two lanes can merge into oen without warning or one can become two or thre, again without warning. Sounds like an invitation to disaster!

My accident took place on Sixth Street between Olive and Hill where the grid is similar to Manhattan. Weaving in and out of suddenly transformed lanes, engenders weird driving habits. Mine as well as others. From my perspective, most LA drivers see the streets as extensions of the freeways and drive on them in abandon.

I have to admit that 90% of my New York driving experience has been in Manhattan where the street grid adds a layer of sanity never to be found in LA. Going to Jones Beach, JFK or LaGuardi requires using the Long Island expressways. I have found them to be disconcerting. If I hd been a Long Island, Westchester or New Jersey resident, I might have a different take on driving in LA.

Given what I said above, do I intend to stop driving here? The answer is an emphatic "No." I am going to continue to drive in LA and join the pack as a cautious defensive driver.
Posted by Allon Schoener at 9:05 AM 0 comments