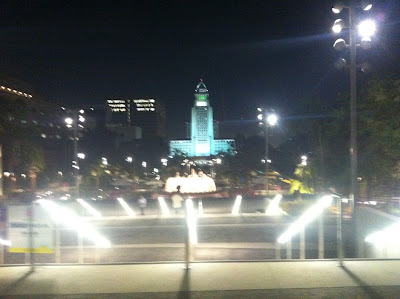 Zócalo, a floating forum presenting admission-free public programs in venues
throughout Los Angeles, hosted a forum, "How Can L.A.'s Art Museums Thrive?"
on September 7, in the recently completed Grand Park (above), a tragically designed
public space that engenders neither comfort nor pleasure.

Jori Finkel, an arts reporter for the Los Angeles Times, chaired the event. Three
museums were represented: Los Angeles County Museum Director, Michael
Govan, Getty Museum Director, Timothy Potts, and Hammer Museum Director,
Ann Philbin. An invitation was extended to LA MOCA Director, Jeffrey Deitch.
He declined; however, the tribulations of LA MOCA were not dismissed. Michael
Govan expressed his admiration for its ground-breaking historical contributions
to both the LA and national art scenes. He said that it is not unusual for cutting
edge museums to rise and fall, citing DIA as an example. He sees hope in MOCA's
future. There was no mention of why the directors of the new Broad Museum and
the Norton Simon Museum had not been invited.

In answer to Jori Finkel's clear questions, each museum director provided a
succinct description of his/her museum's mission and program, most of which I
assume were already familiar to the audience. Michael Govan and Ann Philbin,
touted their New York credentials. Comparisons were made between New York
and LA in which there was an attempt to define distinctions between the two.
There was an under current of visible admiration for the New York art scene and
New York museums. While recognizing that LA was not its equivalent, there was
no indication of apologia. The Getty's Pacific Standard Time exhibitions and
activities were mentioned as confirmation of an emergent LA art scene.

There was agreement that LA museums, as a consequence of their location
on the edge of the continent facing Asia, had a less Eurocentric orientation
than their New York counterparts. Essentially,  LA's museums have briefer histories
and narrower donor bases. New York art museums were credited with exuding auras
with richer dimensions than their LA equivalents. There was a brief digression into
the potential of Hollywood wealth and its nihilism. It was agreed that there was no
tradition of generational support for LA museums as would be found in New York.
Perhaps this was in reference to some great private collections of modern art which
were sent to auction houses rather than LA art museums.

Timothy Potts, the new director of the Getty, who had just logged thirty-two hours
on the job, was at a distinct disadvantage, but did his best to cite experiences in other
places. Rather than lamenting the impossibility of building encyclopedia collections,
whether historical or modern, they saw exhibitions and activities as rewarding areas
of concentration, thus building audiences with accompanying statistical laurels.

Their agreed upon art museum paradigm was the one that emerged in the late 1960s
and 1970s with its attendant focus of opening museums to wider audiences and
hosting periodic blockbuster exhibitions to spike attendance figures.  The term
"world class institution" did not enter the conversation. From my point of view,
there are no world class art museums in LA.  Although not his Getty museum,
Timothy Potts might want to argue that the Getty Villa aspires to such a distinction;
however, there are dozens of museums in Italy with a similar focus that far outclass
the Getty Villa in terms of the quality and depth of their collections.

Michael Govan said, "It's an exciting time to be in LA." He said that there are more
artists here than any other place. His claim elicits some ambiguity because he did
not define who these artists were. He expressed willingness to embrace Hollywood
with the hope of fruitful collaboration. He did not go into detail regarding LACMA's
new affiliation with the Motion Picture Academy except to say that they would be
neighbors when the Academy moves into the former May Company building adjacent
to LACMA.

My Take - A New Art Museum Paradigm is in the Making

Having played a role in creating the 1960s/1970s art museum paradigm in New York,
I witnessed its birth, its world-wide acceptance and its subsequent bastardizations.

What will the new art museum paradigm look like?
It will operate in the realm of virtual experiences occurring on mobile
devices (iphone, ipad and others yet-to-come) simulating traditional
art museum experiences. Today, everyone wants to jump on the social
media bandwagon. Why not?

I find myself in agreement with Michael Govan's evaluation of LA's potential
(Although we might see it differently.) and believe that a new paradigm could
be created here more readily than anywhere else; there is no burden of history
and there are established mechanisms for merchandising novelty.

As yet, there are no prototypes for this new paradigm; however, on a global
scale, elements of this new paradigm are appearing. Below are some links
demonstrating new technologies being applied to art museums.

The google art project takes you to art collections around the world.
http://www.googleartproject.com/collections/

It is possible to visit the Prado Museum in Madrid and see 14 masterpices
with extreme magnification of detail. Go to: Google Earth, then to Prado
Museum, then to Masterpieces.

LACMA has a Digital Museum Of Art Treasures.
http://laist.com/2011/03/26/lacmas_digital_museum_of_art_treasu.php#photo-1
The Getty Research Institute offers image research collections.
http://www.getty.edu/research/tools/digital_collections/index.html
The Metropolitan Museum of Art has a Digital Media Department that
services both visitors and staff.
http://www.metmuseum.org/about-the-museum/museum-departments/office-of-the-
director/digital-media-department

The Louvre in Paris offers virtual tours of its galleries.
http://www.louvre.fr/en/rooms/salle-des-caryatides

There is a virtual tour of Yad Vashem, Israel's Holocaust museum.
http://www1.yadvashem.org/yv/en/museum/virtual_tour.asp

There is a virtaul tour of the Smithsonian's Museum of Natural History.
http://www.mnh.si.edu/panoramas/

The Victoria and Albert has a game app, "Race Against Time."

Where do we begin ? There are myriad possibilities. I am working with
the USC Annenberg School of Communications Innovation Lab attempting
to figure out how to create functional virtual spaces.That is one line of
approach.

Granted that LA museums are saddled with their 1960s/1970s paradigms, what would I
recommend. I see the need for an LA art museum innovation collaborative in which the
museums work in unison to create a new paradigm. This should include embracing the
entertainment industry - film, television and theme parks.

Would they be interested? Just as Intel has discovered that ipads and the cloud
have decimated the market for its processors, the entertainment industry is going to
witness a similar seismic shift when traditional audiences begin to wane.

Clearly, this is a challenge. What will be the products of these new collaborations?
They will be focused on the cloud and the universality of mobile devices. What
would happen to museums burdened with 1960s/1970s paradigms and those that
warehouse physical collections of some valuable and some not-so-valuable art. Like Intel, they would have to reevaluate their future options. That could be the topic for further discussion?

Footnote: I used an ipad for my record of this meeting.