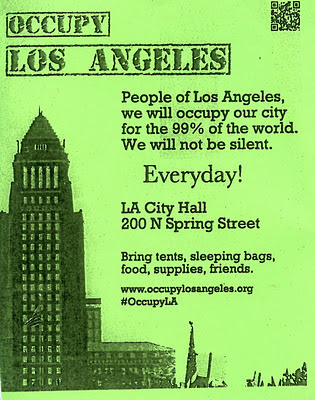 While Mayor Bloomberg and Brookfield Properties joust in feeble attempts to preserve
their tattered images at the expense of the Occupy Wall Street demonstrators in
Downtown Manhattan's Zuccotti Park, there is a different story playing out in LA. In
sharp contrast, LA's mayor, Antonio Villaraigosa, personally passed out ponchos to the
demonstrators encamped on the grounds of City Hall when it rained. The LA City
Council voted in support of the encampment. The police cooperate because they have
identified their collective bargaining rights with issues raised by the protesters. 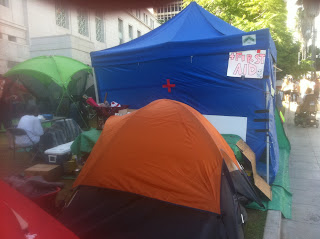 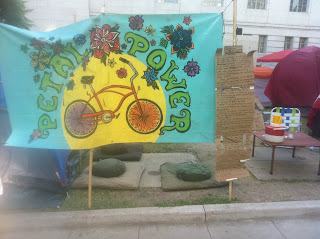 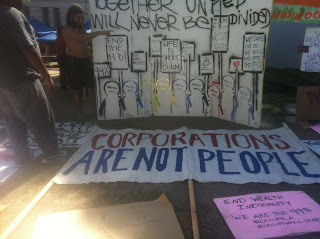 Around 5:00pm on Thursday, October 13,  I made my first visit to the
Occupy LA site. Straying from the sidewalk into a cluster of tents, I
introduced myself to a young man sitting by himself in one of three
folding canvas chairs embracing a small propane stove. Asking if I
could join him, he welcomed me introducing himself as Stiles. I
thought that he might be African American; however, he hails from
South São Paolo, Brazil. He said that he was now 21, had entered
college at the age of fourteen and received an M.A. degree before he
was 20. He described his occupation as a "street fighter," a person who
fights with his fists and knives while others bet on the combattants. It
appeared that Stiles had been in LA before and spoke unaccented English
because his father is an American.

While we were talking, I got a call on my cell phone. It was someone calling
to request money for the Yale Graduate School Alumni Fund. In the past, I
had given the munificent sum of $50. I agreed to repeat it. I informed Stiles
of my conversation and said to myself, "If I can afford to donate $50 to Yale,
I can certainly afford to spend $50 on food for these people." So, I told Stiles
that I would return with pasta. I went to the nearest supermarket, got two cans
of San Marzano tomatoes, two pounds of Barilla linguine, a container of grated
Parmesan cheese, a sliced French bread, two bags of grapes, some bottled
water, paper plates, plus plastic knives and forks. I returned to my apartment to
cook. About forty minutes later, I headed out the door. When I got to the City Hall
park lawn, I stopped in a no parking zone, jumped out of the car and found Stiles.
He and I transported the food to his space. I departed to park the car and hoped to
share my prepared meal with Stiles and his comrades. When I returned, all of the
food was gone. I would have enjoyed eating with them, but was pleased that I had
contributed something. I departed and went home to make some pasta for myself.

Being unable to resist the magnetism of the encampment, I returned on Friday
and met some of Stiles' neighbors. Kevin introduced himself as the former chief
engineer at Halliburton. He tangled with Dick Cheney and left to lead an
unconventional life. Utilizing his management skills, he determined that when the
snow flies in the East, Occupy protesters will migrate to LA. He has obtained
permission to use the "not a cornfield" state park north of Chinatown for the
overflow when they arrive.

Having learned of my background, Kevin asked if I could assist him in creating
a logo. I said that I could not design it myself, but would find a graphic designer
sympathetic to the cause who could do it. I have already moved in that direction.

Departing from my adopted friends' enclave, I went to the fountain to listen to
the proceedings of the nightly "General Assembly."  There was prolonged
discussion of how to handle food donations from individuals like myself. The
LA Department of Health did not want to allow these food donations to be
served from the communal food kitchen because there was no way to ascertain
their quality. Everyone who had something to say was given the opportunity to
speak. Finally, there was a consensus vote indicating that gifts of food could be
accepted by individuals, but not served from the communal food kitchen. Next
a young man spoke with passion on the issue of  the accepted nomenclature for
Mexican Americans. He said that he did not want to be called "Latino" or
"Hispanic," because those terms were invented by the media. He said that the
land on which we were standing was once Mexico and saw himself as identified
with what had been Mexican territory. Therefore, he wanted to be called
"Mexican American." There was no further discussion. I certainly respect what
this young man was saying and will follow his lead.

I was back again on Saturday. As I traversed the whole encampment, I had
a revelation. For as long as I can remember, I have been demonstrating against
America's involvement in foreign wars. During the anti-Viet Nam War
protests, both I and my wife, and sometimes our kids, marched down Fifth
Avenue in New York - time and again. We went to Washington where we were
harassed and gassed. We were members of an angry contingent wanting to
condem our government's policies. Ram Dass, a former Harvard professor
who joined Timothy Leary in his LSD experiments, became a proponent of
Eastern religions. He asked: "How could people be so angry when they want
peace." When the Viet Nam War ended, we went to Washington to celebrate.
People were smoking dope on The Mall and skinny dipping in the reflecting
pool. Joy had displaced anger.

The vibes at Occupy LA remind me of that end of the war celebration. Frustration
and disappointment are evident, but I have yet to feel any pangs of anger. Granted
that it is a different generation with a totally different mind set, I think that
something else is happening. In the Cold War, Russia was the enemy. In the Viet
Nam War, it was the Viet Cong. The distraction of foreign wars is known to be
used as tool of repressive governments to deceive their citizens. The focus of Occupy
LA and the other "Occupy" demonstrations around the world is not external; it is
the excessive greed of one per cent of the population. The demonstrators see the
enemy within. Their complaint is that is that our hi-tech consumer society has been
corrupted by greed and they are being excluded from the benefits of abundance that
our society generates. There is no longer any camouflage. Paul Krugman in The New
York Times, William Reich on NPR and Senator Bernie Sanders of Vermont describe
this disparity with eloquence.

I am intoxicated with Occupy LA. Later this morning I am returning to participate
in erecting a sukkah for the Jewish harvest celebration of Sukkoth.
Posted by Allon Schoener at 8:47 AM 0 comments