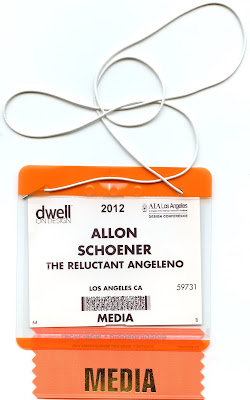 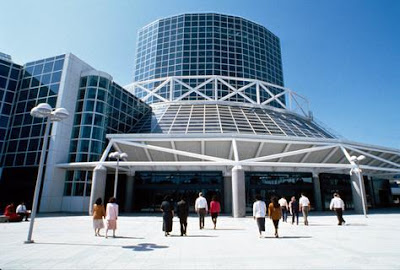 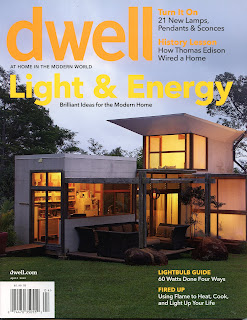 Last week, I was in the domain of a modernist design icon - the Eames

house in Pacific Palisades. This week, I entered the world of a highly
successful commercial enterprise which purports to represent modernist
design. Based on my blog, I was able to obtain a media pass to the
dwell show at the Los Angeles Convention Center. (see above)

Having avoided shopping malls most of my adult life, I am a total novice
in the world of present day consumerism. When my wife Mary had a
specialty food business, I would help her set up at the food shows in New
York's Javits Convention Center. There, we were exposed to the underbelly
of the convention center world and learned how to cope with the mafia
controlled workforce there. In Milan, I had attended several big trade
furniture shows and was prepared for the worst - bad design promoted as
good design, with emphasis on commerce at a banal level.
Much to my surprise, I found "dwell on design" to be a reasonable
mix of some interesting designs, some blatantly commercial products
and some innovative designs offering real promise. "dwell magazine"

is a coherent and  tasteful presentation of living with modern. Much as
"Design Within Reach" has created a network of stores where many
classic examples of modern furniture can be purchased along with work
by younger designers, "dwell magazine" has expanded knowledge of
modern design to broader audiences representing a younger generation.
My taste is more orthodox, so I am never going to be a big fan of popularized
consumer modern. 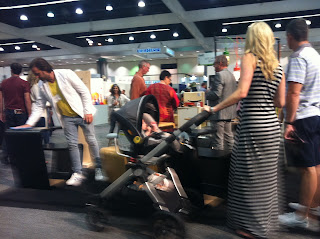 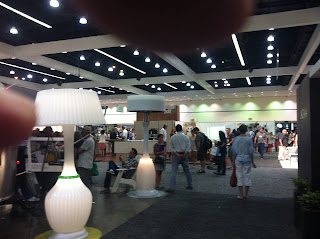 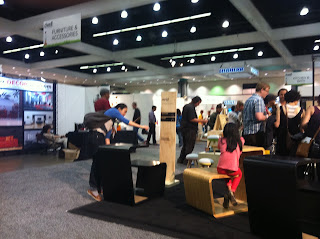 Perhaps most significant for me was the discovery of a
brilliant innovative design by students from Woodbury
University School of Architecture. It is a universal joint
system that offers incredible flexibility. It is not a replica
of Buckminster Fuller's geodesic dome system; it goes
beyond that by making it possible to create shapes of
infinite variety. 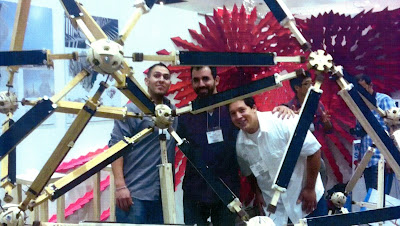 From left to right: Jesse Cabildo, Andre Gharakhanian, and
Charles Ghiotto. Knowing of his interest in innovative design,

I contacted Rolf Fehlbaum, head of VITRA furniture in Basel,
Switzerland, hoping that he might have an interest in this
innovative concept. 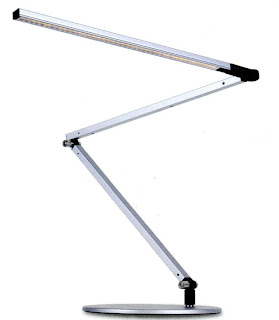 As the owner of five "Artimede" lamps and four "Luceplan" lamps,
I am partial to modern Italian lamps.  The "Koncept" LED lamps,
made in Hong Kong, were a discovery. Selling in the range of
$250, they are a great design at a great price. 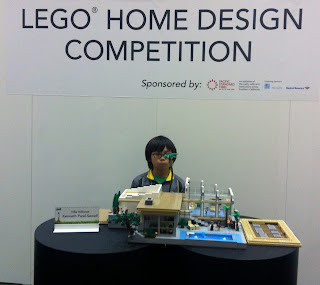 As a footnote, eleven year-old Kenneth Parel-Sewell's prize
winning Lego house design was sheer delight, as was he.

Revisiting the Eames House after 60 years 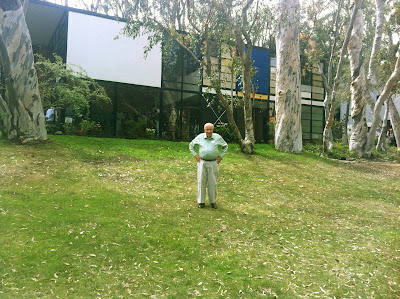 On Saturday,  June 16, I was privileged to be invited to view the Eames
House at 203 Chautauqua Boulevard in Pacific Palisades, to celebrate
the nearly completed restoration of the house, and to celebrate Ray Eames'
100th birthday. I had been there often between 1951 and 1955. It was
nearly sixty years ago when I last saw the house.  Sixty years ago, it was
my good fortune to have been a periodic guest in the house, to engage in
illuminating discussions with Charles and to enjoy Ray's culinary treats
presented as beautifully organized visual displays.

The Eames House was one of John Entenza's landmark Case Study Houses -
http://en.wikipedia.org/wiki/Arts_%26_Architecture
a series of modernist homes designed by architects who were engaged in
the  process of transforming American domestic architecture. Los Angeles,
at this time,  was a caldron in which masters and experimenters, among them,
Frank Lloyd Wright, Richard Neutra, Rudolph Schindler, Raphael Soriano
and John Lautner were most visible.

Although Charles was trained as an architect, the house at 203 Chautauqua
Boulevard could not be described as a product of traditional architectural
practice. It was designed to utilize standard, industrially mass-produced
"off-the-shelf" components. These standard elements were orchestrated to
create a non-standard solution. It was a home, a studio, a space in which to
entertain guests and a display area for their latest creations. It served the
dynamic nature of their personal and professional lives.

Viewing it again after a nearly sixty-year hiatus,  I found that the design is
still as fresh (to my eyes), as it was when I first saw it. It falls into the category
of iconic designs, those that possess sufficiently innovative characteristics
to withstand the ravages of time.

About fifteen years ago, through my friend, Jean Dethier, then head of the
Centre de création industrielle at the Centre Pompidou in Paris, I was able to
visit the recently refurbished Villa Savoye, one of the most significant icons
of moderist residential architecture designed by Le Corbusier in 1929 and
completed in 1931. 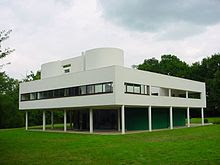 When I visited the Villa Savoye, the interior was barren, as were the spaces
at the Eames house, so that it was possible to appreciate the inherent clarity
of design in both places. There is no direct connection between these two
structures; however, there is a symbiotic/stylistic association. Both possess
refined organization of space and polished detailing. Both were situated to
harmonize with their settings in nature and to embrace that connection with
what we might call "indoor/outdoor" spaces. My predilection has always
been toward "modernist" design of which these two buildings are outstanding
examples.

We are fortunate that both buildings are being preserved for posterity. The
Villa Savoye fell into disrepair and was being threatened with demolition.

It was designated as an official French historical monument in 1965 (a rare
occurrence, as Le Corbusier was still living at the time). It was thoroughly
renovated from 1985 to 1997. Today, it is under the care of the Centres des
monuments nationaux and the refurbished house is open to visitors year-round.
The Eames House is owned and maintained by the Charles and Ray Eames
House Preservation Foundation and administered by family members.
http://eamesfoundation.org/eames-foundation-mission
According to Lucia, Charles' daughter, " We have to make the work of
Charles and Ray relevant to the future. The house will always give a feel
for their approach." 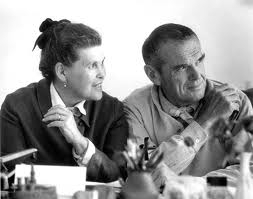 As I continue to struggle attempting to find both a niche and an identity
for myself in Los Angeles, making this connection with Charles and Ray
provided me with the opportunity to draw on pages from my past and to
associate them with my present.

I often describe Charles as my mentor. I wanted to reside within the domain
of his perfectionist standards. I recall sitting in the living room alcove as he
lamented errors that he had made in the design of the sofa compact. He said,
"As soon as I have finished designing something, I can see all of the mistakes
that I made." With regard to the sofa compact, we had one in our home for
many years and I never found any detail that was not perfect.

My unforgettable experiences with Ray revolve around food. To have her
serve breakfast, was a gustatory and visual delight. Her soft boiled eggs
were always perfect as were the breads, pastries and jams which she served.
Flowers and Mexican candelabra, perfectly orchestrated in size, shape and
color complemented the tastes and textures of the food.

If Charles and Ray found living in LA to be a hospitable, exciting and
rewarding experience, perhaps I can,  yet, learn another lesson from them.

Kevin Roderick of LA Observed wrote and I responded: