How Does a Transplanted Jewish New Yorker Feel About Living in a Largely Latino Neighborhood? 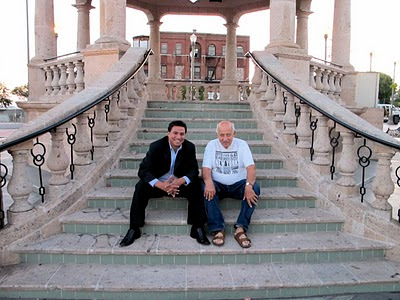 I like your blog. I have a better understanding of of what a New Yorker is doing
on the streets of Boyle Heights. You looked deep in thought the other day when
we were marching and u were on the bus bench. It also seemed u were surprised
when you saw the march going by ... I love Boyle Heights ... I love what it has
always stood for; it welcomes everyone.

It gave me a lot as a young immigrant boy new to this wonderful country ... how
does a transplanted New Yorker feel in a largely Latino neighborhood?

I am flattered that you found time to write to me at 4:14 AM.

In answer to your question, "how does a transplanted Jewish New
Yorker feel about living in a largely Latino neighborhood? you evoked a
strong emotional chord - something that has been central to my life experience.
Although I prefer to think of myself as a New Yorker because I have lived
and worked in New York City for the majority of my life, I was born in
Cleveland and left at the age of seventeen to go to Yale and never returned.

Yale provided me with my first and perhaps most significant adaptation
experience. Arriving at Yale as a lower middle class Jewish kid from
suburban Cleveland, I was a total outcast. Unlike my classmates whose
parents were bankers, stockbrokers and industrial barons, my father was
into "schmatas" (in his case, men's clothing) and my mother was a
salesperson in a department store. The Yale class structure was rigid.
There were those who wore white buck shoes(white men) and everyone
else (peasants and black men).

The dominant WASP social class excluded me. Anthony Coe III who
lived on a grand estate on Long Island sat next to me in an American
literature class for a year. He never spoke to me. I kept asking myself,
"Who am I?" Having relatives who were well-recognized artists living
in New York, I was welcomed as a weekend visitor. In addition to
haunting museums, I found myself drawn to The Lower East Side, the
Jewish immigrant portal to America. I walked the streets, ate in the
few remaining delis and dairy restaurants. Still standing, was the
elementary school on Houston Street that my father atteneded forty
years before. By the time that I got to The Lower East Side, its epic
past had disappeared. There were shadows and ghosts.

My exposure to this bygone era provided me with a sense of personal
security when I returned to Yale. Perhaps I was a black man or a peasant,
but I knew that I, too, had a history. It also provided me an enduring
sense of personal identity. Thereafter, I never questioned being a Jew.
That is why I wanted to live in New York. There were so many Jews of all
stripes living in New York that I knew that my Jewishness would never
be an issue. When asked who I am, instinctively, I say a "New York Jew."

Twenty years after Yale, as the Assistant Director of The Jewish Museum
at Fifth Avenue and 92nd Street, I created one of that museum's most
successful exhibitions, "The Lower East Side: Portal to American Life
1870-1924." As the exhibition demonstrated, The Lower East Side was
neither a place nor a time. It is a complex historical idea embroidered
with emotional overtones. There was group pride that so much came
out of it. The older generation had nostalgia, the younger generation
acknowledged their Lower East Side heritage with varying degrees
of enthusiasm. As with so much Jewish history, no roots with enduring
continuity were planted. The reality of The Lower East Side is the
memory.

When the exhibition opened, there was a line stretching from the
front door of the museum around the corner to Madison Avenue, a
city block away. The exhibition initiated the era of blockbusters.It
provided me with the opportunity to obliterate the indignities that
I experienced at Yale. Every Sunday, I would go to the museum
to observe grandparents pointing to the various photo enlargements
in the exhibition evoking the past for their offspring who listened
in rapture.

Now, getting back to your question "how does a transplanted
jewish new yorker feel about living in a largely latino neighborhood?"
In Boyle Heights, no one questions who I am. I believe that I am
accepted as another human being without either racial or class
distinctions. I am comfortable wherever I go regularly: Mariachi Plaza
Farmers Market, Primera Taza coffee house on First Street, Valarta
supermarket on Whittier, Soto Car Wash at Fourth and Soto, and CVS
pharmacy on East Olympic. My inability to speak Spanish limits my
ability to communicate, but does not inhibit my acceptance
in the community. I am taking Spanish lessons at Corazon del Pueblo
on First Street and I am working with the Boyle Heights Historical
Society on an exhibition documenting the history of Boyle Heights.

I have often discussed racism and discrimination with my friend of
forty years, Pedro Lujan, a Mexican American sculptor from El Paso,
living in SoHo in New York. When I would describe my sense of
exclusion as a Jew, he would counter saying that he always
thought of Jews as "mainstream."

Since you inspired this response, I would like to post it on my blog
with a photo of the two of us together. Do you think that it would
be possible?

I truly enjoyed reading your response to my question, "how does
a transplanted jewish new yorker feel about living in a largely
latino neighborhood? I read it with great interest. The class and
racial analysis took me on a provoking journey.

You ... have really attempted to understand and immerse yourself
in Boyle Heights.

After reading your response to my question, it appears that your
background, experience, and professional career, lent you to easily
explore one of LA's oldest, most accepting, and once diverse
neighborhoods. I suspect you enjoy the rich Jewish history that
Boyle Heights has to offer - I also suspect that you enjoy the
challenge in navigating the area given your artistic background
and experience with class and racial issues. You know Boyle Heights
very well for your short time here. Welcome again.

I, similar to your friend Pedro, also viewed Jews as "mainstream"
and perhaps did not make any distinction between being "jewish"
and "mainstream," until sometime in my latter undergraduate
years at UC Berkeley. This, as other things you mention in your
response, deserves additional discussion in the near future ...

How about 7:30pm @ Mariachi Plaza today, Monday, for the
Photo?

Again, thank you again for taking the time to respond. With your
permission, I want to include latest response in my blog.

From the dust jacket:
"... By the twentieth century, however, prejudice against Jews had intensified,
for they did not fit into the clublike atmosphere that now pervaded Yale --
where diversity was unwanted and overindulgence in book learning was
suspect. The restricted Jewish enrollment that originated at this time
continued until the 1940s, when the Second World War began to liberalize
American -- and Yale -- attitudes."
====================================================