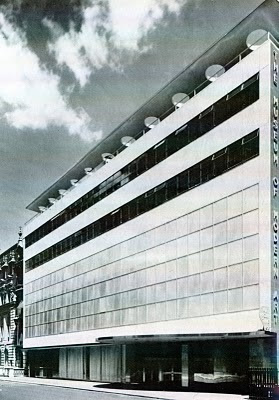 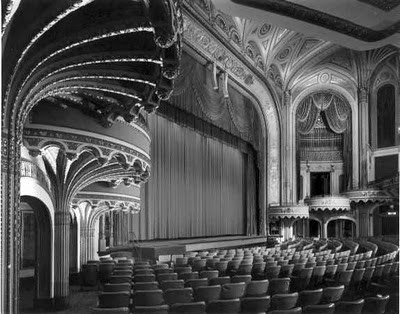 It was the summer of 1949. Fresh out of Yale with two degrees, I came to New York to make my fortune. Unfortunately, the first Post World War II recession was in full swing. Good jobs were non-existent. Someone told me that the Yale Club had an employment agency. Naïve me, I thought that there could only be "good jobs" at the Yale Club. The best they had to offer was what was called a "Junior Salesman" for the Royal Typewriter Company. I took it. My boss was the grizzled Howard Forshay from Queens, a veteran of the typewriter wars. His daily ritual was leading the morning pep talks. "Tell them how great the Royal typewriter is and say whatever makes the competition look bad." My job was to work under a salesman with an assigned territory and to place demonstration typewriters in offices. Later, that salesman would return to hopefully convince the office manager to buy one. Junior Salesmen were promised a percentage of the salesman's commission if the sale was consummated. Unscrupulous salesmen shuffled the paperwork so that junior salesmen never got their share of the commission.

Two weeks on the job, I knew that I made a disastrous error. So, I had to make the best of a bad deal. After the ritual pep talk, I was on the street supposedly selling typewriters. Having been familiar with the exhibitions and programs at MoMA, I knew that there were daily film showings from the museum's collection of historically significant films. The MoMA film showings were my salvation. The Royal Typewriter job lasted about nine months until I was fired.

During that nine months, I must have seen all of the films in the then MoMA collection. Films were shown in the basement auditorium. Although MoMA was multiplexed in one of its many building programs, the basement auditorium remains with a benefactor's name attached. This was 1949, only twenty years after the birth of sound movies. Historic films were silent. On the auditorium floor to the left of the screen stood an upright piano. There sat the indefatigable Arthur Kleiner, a Viennese refugee, who played prescribed scores as well as his own compositions accompanying these films. Later in my career, when I was working with the MoMA Film Library, I got to know Arhtur Kleiner and told him how he and the MoMA film collection provide solace during my desperate early days in New York.

For years, I assumed that a piano provided the appropriate accompaniment and that Arthur Kleiner's piano scores were as authentic as it could get. Little did I know that most movie theaters showing silent films in the 1910s and 1920s first had live orchestras, then either pianos or what were called "theater organs." Seven thousand of these generic theater organs populated an equal number of movie palaces in cities from coast to coast. They were 2,000 to 3,000 seat theaters with huge screens below proscenium arches surrounded on their flanks by opera style boxes complemented by huge balconies that often rose to six stories. Movie-going in the teens and twenties was a glorious experience transporting legions of city dwellers: new immigrants, former farmers and factory workers from their humdrum existence into a world of glorious fantasy.

No anemic piano accompaniment here! We were subsumed with blasts of sound emanating from the Orpheum's recently refurbished 1928 Mighty Wurlitzer organ masterfully orchestrated by Robert Israel. He manipulated the keys, the pedals and the stops to create appropriate sounds from the organ's battery of metal and wood pipes capable of simulating over 14,000 orchestral sounds.

For me, it was a profound experience. I witnessed the recreation of an authentic historical sight and sound phenomenon, sharing it with with the approximately 3,000 others in the audience. I thought that I had been transported back to the 1920s. The film, its organ accompaniment and the theater itself might not have been original, but they were as close as it was possible to experience the original.

Last year, my wife and I went to Ostia Antica, the partially restored excavation of the ancient port of Rome. Having been to Pompeii several times (It was originally a Hellenistic city.), I consider Ostia Antica a more compelling recreation of a Roman urban experience. Here you see the extensive remains of a two thousands year old Roman urban complex with virtually complete fragments of "insula," the multiple story structures with shops at the street level and residences above. You see the original forum, Ostia's civic center, with fragments of religious and secular structures arrayed around this open space.

As you amble along remnants of paved streets, gazing from side to side, you begin to believe that you have been transported into a bygone era. That is how I felt at the Orpheum last Wednesday night when I saw "Peter Pan" accompanied by a Mighty Wurlitzer.
Posted by Allon Schoener at 9:12 AM 0 comments

Can LA Do It Better Than New York? 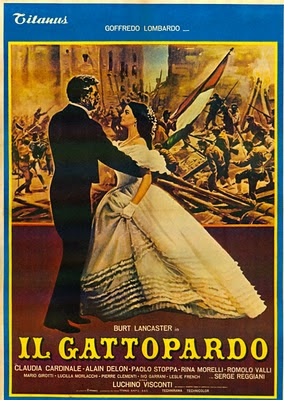 Reluctantly, my answer is "yes." Last Saturday night, I went to see "Il Gottopardo," (The Leopard) at the Orpheum Theater on Broadway in Downtown LA, a feature of the LA Film Festival.

Having been maintained and restored, the Orpheum exudes the opulence of a bye-gone era - the birth of mass movie audiences - when it opened in 1926.

The Orpheum was the perfect setting in which to see "Il Gottopardo," Lucio Visconti's lavish masterpiece which evokes the decadent lifestyle of aristocratic Sicilians in the 19th century. The newly restored print was being premiered in LAto a full house six hours after it had been premiered in Bologna to an audience of 6,000 in an open air plaza. At The Orpheum, there was a brief introduction explaining the technical feats accomplished in transforming the original negatives into an improved film satisfactory for projection. Before the film was seen on the huge horizontal screen which must be 20 feet by 80 feet, two of Burt Lancaster's daughters were recognized in the audience. They stood to a round of applause.

Saying LA and New York in the same breadth, connotes a bifurcated American film industry. They compete regularly on the basketball court and baseball field. The museums are not in the same league. I can't evaluate symphonies nor operas, but I can evaluate cultural experiences. This one was profound. It could not have been presented under better circumstances to a more attentive and sympathetic audience who responded at the appropriate moments with sounds of awe and approval.

Such an event never could have happened in New York.

There is no extant film venue in New York equivalent to the Orpheum. Years ago, I recall having gone to movie theaters like the Loew's 86th Street. The auditorium space exuded luxury; the walls, ceilings and chandeliers evoked echoes of palatial Baroque grandeur. There was a legion of similar houses throughout the New York Metropolitan area.

No longer standing, Loew's 86th was first carved into a multiplex, eventually demolished and replaced with pedestrian residential architecture.

The motion picture palace was invented in New York. The Regent Theater which evoked an image of The Doges Palace in Venice opened in February 1913 on Seventh Avenue and 116th Street in Harlem.

Harlem Magazine, May 1913, raved about the new theater. “Harlem’s latest and handsomest entertainment house marks an altogether new era in the motion picture world, as it is,without question the largest and most completely equipped motion picture playhouse yet opened. For beauty and convenience it surpasses many of the Broadway theaters. It has been the intention of the Regent management to give New York Theatre goers something new in its form of entertainment in a combination of the finest selection of photoplays that can be produced and music of high and pleasing quality.” 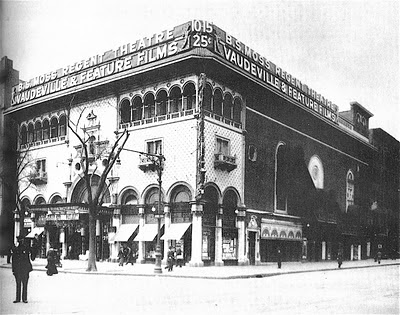 Like the Orpheum in LA, The Regent is still standing, but has not shown films for over forty years. Since 1964, it has been the home of the First Corinthian Baptist Church. It is in good condition. There have been some modest alterations of the interior and the church maintains the exterior. Loew's 175th Street in Washington Heights on New York's Upper West Side is another masterpiece of cinema architecture that has survived. It was a venue for a charismatic preacher, "Reverend Ike."

Revered Ike moved to LA in 2007 and died in 2009. The building has an uncertain future.

Why it couldn't happen in New York

To the best of my knowledge, there are no former movie palaces with seats numbering in the thousands still functioning as motion picture theaters in New York. Yes, there are many venues for viewing films in New York, but they are small to modest spaces with small screens (often fuzzy projection) and imperfect sound. Opening in 1932 with 5,933 seats, Radio City Music Hall, originally conceived as motion picture / vaudeville house, was then the largest movie house in the world.

For the foreseeable future, New Yorkers are going to be limited to viewing films in constricted locations. In Los Angeles, it is a different story. The website "Los Angeles Movie Palaces" provides an inventoryand report of the current status of theaters throughout the area.

Although LA wins hands down over New York on this one, there are others where it does not fare as well. Keep tuned; they are my future agenda.
Posted by Allon Schoener at 9:07 AM 0 comments