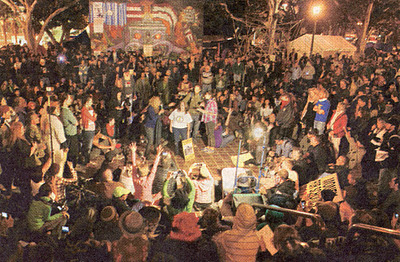 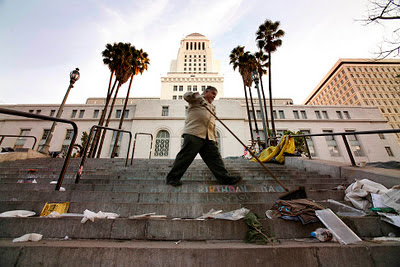 Above: Sunday evening, November 28, three thousand people
gather in support of Occupy LA at its site in City Hall Park. Not
visible, I am seated on the ground behind the woman in the rose
colored sweater in the center left. Below: In the wake of the LAPD
raid the night before, on Wednesday morning, November 30, a
sanitation worker is clearing the steps in front of City Hall.

What Occupy LA Meant to Me
I am chagrined to see it disappear - hopefully momentarily. For
me, it represented a breath of fresh air in our society which has
been overwhelmed by greed and indifference. Occupy LA was
one of many such encampments around the globe inspired by
Occupy Wall Street in Lower Manhattan. The movement's slogan,
"We are the 99%," resonated and needed no explanation. For
everyone, there was no question of "which side you are on."
Those of us who would welcome social change were inspired;
those who want to see the imbalance continue were threatened.
Social revolutions are long term affairs: evolving, contracting
and finally blossoming.

There is no question in my mind that we are seeing only the
beginning of the Occupy movement that might morph into
something more enduring. Although the Occupy movements
disdain vertical leadership, there is a cadre of people called
"point persons," who have emerged with knowledge and
experience; hopefully, they will not disappear, nor will they be
co-opted by the system that they abhor. Organized labor, which
has been marginalized, sees a potential for itself in aligning
with the Occupy movements. Hopefully, together they will be
able to sustain the momentum that has evolved to date. However,
I fear that the repressive apparatus of the FBI and Homeland
Security clearly wants to extinguish any vestige of the occupy
movement. Hopefully, they will not succeed. I sense that we are
moving into a period of dramatic and exciting social change which
will influence the lives of generations to come.

While it lasted, Occupy LA was an integral part of my life and
consequently, my wife, Mary's life. (Below, Mary is not sleeping;
she is relaxed in reverie.) 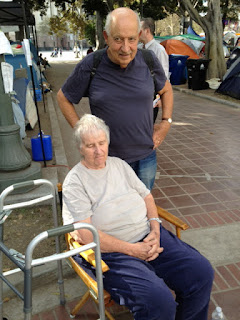 For us, Occupy LA symbolized the idealism of the hippie movement
of the 60s and 70s which was so identified with our lives. 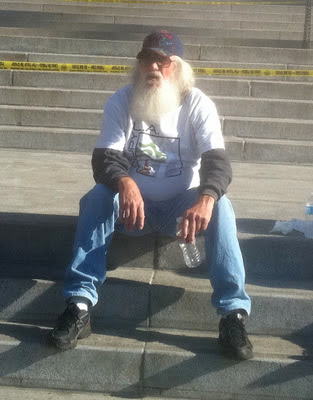 Adopting a logo design by Tracy Fink, I was able to get
American Apparel to provide us with 200 printed tee
shirts. They disappeared in five minutes.
Posted by Allon Schoener at 4:50 PM 0 comments

How Los Angeles Invented the World

A shuffled replay of this event can be seen: http://zocalopublicsquare.org/thepublicsquare/2011/11/20/was-ever-a-city-more-bewildering/read/the-takeaway/


Panel One - How Los Angeles Created the Good Life


There were three panelists and a moderator - dull / pedantic academics who,
except for one, the curator of photographs at The Huntington Library, exhibited
the enthusiasm of dead fish. The Huntington curator was allowed to show two
photos similar to the one below which demonstrated the innovative Southern
California indoor/outdoor informal life style of the post World War II period
which has since been adapted across America.

Of the three panel discussions, this is the only one which addressed the theme:
"How Los Angeles Invented the World."

" all the leaves are brown
And the sky is grey

Unfortunately, no one mentioned another Pacific Standard Time event, an
excellent exhibition at the Los Angeles County Museum of Art,  "California
Design, 1930-1965: Living in a Modern Way," which documents in well-
organized detail the work of the artists and designers who contributed to this
new vision.
http://www.lacma.org/art/exhibition/californiadesign

Granted that LA today is one of the most ethnically diverse cities in the world,
it was hard to figure out why ethnicity entered the picture. East coast cities like
New York and Philadelphia, plus midwestern Chicago, had long ago established
America's urban multiculturalism with its concomitant ability to accomodate
minority cultures. It took a question from the audience to draw attention to the
long burning issue of restrictive housing codes that were endemic in pre-World
War II LA neighborhoods - with the exception of Boyle Heights which embraced
a highly diverse population of immigrants including Jews, Japanese and Mexicans.
At the conclusion of this session, I don't think that anyone in the audience had
learned a thing about "How Los Angeles Created the Good Life" that he/she did
not already know.
Panel Two - How Life Imitated Art

Because of all the local boosterism, I thought that I had been parachuted into a
luncheon of the Indianapolis Chamber of Commerce; however, I loved every minute
of this one.  It was loaded with an incredible group of extremely talented people
who live and work in LA. For them, LA serves as an ideal background for films,
which is their business. They were: director William Friedkin, critic Richard Schickel,
critic Kenneth Turan, and writer/director Thom Andersen. Reed Johnson of the
Los Angeles Times was moderator.  They considered the inherent instability of the
environment to be one of LA's challenging attributes. Although they alluded to an
LA sensibility, they did not define it. They contrasted the LA image of optimism
with the LA noir image, which they considered equally valid. For them, "Blade
Runner" was an iconic LA film.

Panel Three - The Past and the Future of LA's Global Image

Another luncheon at the Indianpolis Chamber of Commerce with a panel of brilliant,
creative people. Warren Olney of KCRW was moderator. Panelists were: director
Wim Wenders, director John Singelton, essayist Richard Rodriguez and architect
Eric Owen Moss. How can you not love and enjoy a gab fest with such people? I
don't think that they addressed the announced themes any more so than the previous
panelists, and I don't think that I retain any great ideas expounded here, but, again,
I loved every minute of it.

It is not easy to run a panel discussion with a bunch of high-powered independent
people; however, there are some methodologies that are often used to keep panelists
focused on the themes to be discussed. I had a good time, but I would have learned
more, which is the reason that I went, if there had been some thematic discipline
evident. It was great entertainment, but not a lot of learning!

This event reinforced New York intellectuals' perception of LA as a place where
entertainment predominates and substance is slight. Overall, I would say that the
organizers of this event blew it. They failed to make a case that LA is beyond fluff.