Grand Debacle at 42nd and Fifth

On the morning of Thursday, May 8, 2014, it was front page news in New York.
Thus came to a crashing end the much criticized plan of The New York Public
Library's administration and trustees to transform the classic structure, housing
millions of books, that had served generations of New Yorkers, into a virtual
honky tonk international visitor center replete with coffee bars  and souvenir
counters masking under the rubric of creating a 21st century library offering
enhanced services. Absurd as this had been, it was endorsed by the trustees, a
group of distinguished academics, major periodical editors and business executives
associated with some of the nation's most prominent enterprises. One must ask,
"How could a group of well-intentioned, intelligent, and in some cases, wealthy
people, have made such a blunder?"

Among “Facilities Plan Goals” it states “Make our Fifth Avenue building a
greater international destination.” It further proposes, “A New Central Library,
Move books to high-density stacks under Bryant Park ... Remove stacks ...
Repurpose space for multilevel circulating library ... Draft Concept: Not
a Design Plan.” The esteemed British architect, Norman Foster, who heads
a firm of 1500, was engaged to design the physical transformation of the
building. It should be noted that his much criticized and generally unpopular
design of the transformation of The British Library in London has been
described as "architectural evisceration."

The perpetrators of this ill-fated scheme were former staff members: Paul Le Clerc,
then President, and David Offensend, then Chief Operating Officer. LeClerc was
a French literature scholar and former president of Hunter College in New York.
David Offensend came from the world of investment and banking. He served as
President and Chief Executive Officer of now defunct Lehman Brothers Merchant
Banking Partnership.

In cultural organizations, it is an accepted practice that the staff create programs
and that the trustees endorse them and self-fund or find outside sources of funding.
It is my contention that the Board trusted the staff who obviously were malevolent
in the execution of their duties. Or, it might have been a rich and powerful trustee
who served as the motivator. Whoever was responsible afforded no respect for the
essential purpose of the building nor its architectural character. The removal of the
cast iron stacks which held the majority of the books was established as a high
renovation priority.The NYPL administrators  speak of "less used books" as though
they represented a plague to be obliterated.

At this point, there is no solid trail of evidence leading to the fiasco; therefore,
speculation is appropriate. New York's voracious real estate industry ran amok in
the Bloomberg years. The Library's properties in Midtown Manhattan were desirable
targets for developers. In addition to the Main Library Building at Fifth Avenue and
42nd Street, the NYPL controlled properties in Midtown Manhattan included: Donnell
Branch on West 53rd Street opposite the Museum of Modern Art, the Mid-Manhattan
Branch Library at Fifth Avenue and 40th Street, and the Science,  Industry and
Business Branch occupying several floors of the building on the Northwest corner of
Madison and 34th. One of the objectives of The Central Library Plan was to relocate
Mid-Manhattan plus Science, Industry and Business within the main library building
and to sell the two properties where these library services are currently located. The
Library does not have a good record in its real estate dealings. The Donnell property
was sold for less than the developer received from the sale of the penthouse in the
building constructed on that site.

As a result of the tireless efforts of a small group of dedicated library users, among
them the Committee to Save The New York Public Library and its allies, the David
and Goliath legend became a modern day New York legend. Along with that,
the election of populist Mayor Bill de Blasio, changed the equation from proposed
glitz to diversified community service. Rather than support the creation of a luxury
brand in Mid-Manhattan, New York City's library support was directed toward branch
libraries. Thus, $150,000,000 of city money promised by Mayor Michael Bloomberg
as part of his campaign to convert Midtown Manhattan into Singapore East was
no longer available. As criticism mounted, the loss of these funds was sufficient to
doom the Central Library Plan; however, it failed to curb the library's inane plans to
transform the main building from a research library into some undefined entity. The
millions of books that are the core of the research collections have been removed
from the stacks which remain empty. According to President Marx, the barren stacks
will be open to visitors to view as an historic relic.  (Can an adult professional be
taken seriously for making such a remark?)   It is proposed that the majority of the
research book collections will be housed in underground storage space beneath
Bryant Park that had once been planned as a parking garage. This space has
questionable climate control potentials. Yet, on another occasion, President Marx
said that the stacks would house the Mid-Manhattan's circulating collections. This
might have been  stated when the Mid-Manhattan building was being considered for
sale. The situation has changed. If he is to be believed, President Marx said that the
Mid-Manhattan building will not be sold and that it will be renovated. We have
heard nothing recently about the fate of the stacks,

The past is history. The future is as equally as troublesome as the past. Since this
humiliating defeat, it is apparent that the administration and trustees have chosen not
to acknowledge the reality of the situation and are attempting to give this self-induced
fiasco a positive spin. If this is advice from The Library's public relations consultants,
they should be fired. So, what have we heard from The Library's representatives?
Contrition, definitely not. They are moving ahead with their righteous sense of unrestricted
authority as though nothing occurred.

President Tony Marx boasts of their opening up previously private spaces to the public;
however, there does appear to be any clearly articulated program for the use of these
spaces. In response to frequent criticism that The Library does not have an advisory
board of user representatives, Tony Marx announced recently that plans for such a board
are being promulgated.  Once before, he made a similar promise. To date, no such group
exists.  It should be noted that the Bibliothèque nationale de France in Paris hosts a
mechanism for monitoring the attitudes of its users. In the age of ubiquitous electronic communication and social media, there are many ways in which consumer attitudes can
be assessed. President Marx speaks glowingly of bringing The Library into the 21st century,
yet neglects to utilize some well-tested attitude assessment procedures.

The mantle of respect which this building generated for more than a century has been
fragmented to the point of oblivion. In the Wall Street Journal of May 14, 2014, Eric
Gibson, Leisure & ARTS Editor, proposed that the trustees rename the Schwatzman
Building (as the the Central Library is known in the wake of a multi-million dollar gift from
billionaire Stephen Schwartzman. Perhaps Eric Gibson is serious; perhaps it is a frivolous
joke? Given Tony Marx's proclivity for outlandish statements, sooner or later the NYPL
might become the subject of derision by late night tv hosts.

Although they appear to be coined by a public relations consultant, The Library's
pronouncements smack of cultural institutional arrogance and intransigence. This
is a malaise that appears to affect many institutions, often art museums where the
director appropriates a mantle of self righteous behavior, hauteur and denial. Yes,
this does not speak well for any and all such practitioners. In the case of The New
York Public Library, President Anthony Marx is a member of this despicable cadre.
Although it appeared to be apparent that the Central Library Plan had been defeated
and should be scrapped, President Marx continues to support its core philosophy
and planned implementation. Not to be overlooked, The New York Public Library
receives a considerable amount of its annual operating budget from the City of New
York. So, it must answer to all of the citizens of the city. In this respect, it hardly
warrants a passing grade.

Granted that he did not initiate the disastrous Central Library Plan, Tony Marx
embraced it becoming its champion. Given his errors of judgement, and contradictory
remarks, one is compelled to ask if Tony Marx should be allowed to continue to direct
the future of The New York Public Library? Although he received considerable praise
for his previous positions, it is becoming increasingly apparent that he is the wrong
man for this job. As Arthur Sulzberger decided recently, that he made the wrong decision
when he anointed Jill Abramson as Executive Editor, and the right one when he fired her.

The fate and future of 42nd Street Library is in the hands of the trustees; one must hope
that they function more responsibly in the future than they have in the past.

A NEW YORK CIVIC / CULTURAL TRAGEDY IN THE MAKING 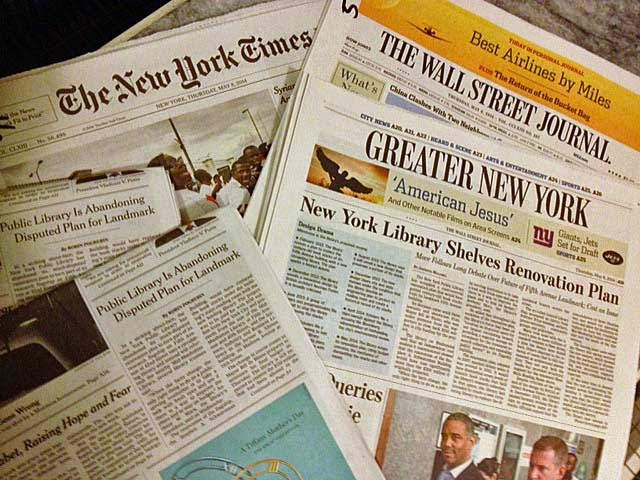