On Los Angeles' Aspirations to Become a "World Class City"

The CCA describes itself as "lobbying government and advancing
policy in shaping the future of Los Angeles business. And it's fueling
the renaissance of our entire area." http://www.ccala.org/

Having organized and attended similar events in New York and Paris, I can
recognize a good one when I see it. This was top notch.

In an attempt to assert LA's status as a "world class city," there were
three one and a half hour sessions with some of the major players who
are going to participate in and accelerate the creation of an urban center
for Los Angeles.

At a forum focused on sensitivity to New York's urban environment held
in a ballroom at the Waldorf, I was on a panel with Philip Johnson. To make
my point - that it was as important to be as sensitive to what we build as what
we eat - I distributed loaves of artisanal bread and Wonder bread encouraging
members of the audience to taste them. The room was a mess, but I made
my point. I hope this post will be as provocative.

Downtown as An Economic Engine

The Central City Association reports that "The current renaissance has
transformed Downtown Los Angeles from a 9-to-5 business center to a
residential, cultural and entertainment destination with 27,000 new residents,
83,500 new jobs, $180 million in tax revenues to the city and county and
$10.9 billion in business revenues."

So, what kind of a city is evolving and what can we expect to happen over
the next ten to twenty years? After digesting what the various power brokers
of major and minor scale had to say, here's my take.

More than half the world's population - 3.3 billion people live in cities

According to the "United Nations Report, State of the World Population,"
this milestone was reached in 2007. By 2030, the number is expected to be
5 billion, the majority of the people on this planet. We are entering a new age
in which urban environments will continue to expand everywhere.

Awareness of a generational shift

One of the panelists stressed that there is "going to be a surge in demand for
downtown housing among the twenties." This was amplified by another who
spoke of living in Orange County and raising his family there. Unquestionably,
his children were the products of car pool culture. His son did not want to live
in the suburbs; he is living downtown. Many people with similar histories
are attracted to living and working in downtown LA. Such people are the
majority of current downtown residents and represent the nucleus of an
expanding population. For another panelists, seeing a couple walk their dog
after dark, obliterated personal safety as a factor in choosing to live downtown.

The importance of transportation infrastructure

No one disputed nor regretted the demise of the dominance of the automobile.
There was general agreement that completing a suitable local and
regional transportation infrastructure including an expanded subway
system integrated with high speed rail was the city's highest priority.
While this was being built, it was acknowledged that automobiles and
their corollaries: freeways and parking, had to be reckoned with. There
was also discussion of enhanced transportation alternatives within the
urban core.

One panelist said that "Streets are for everyone, not just for cars."
New York was considered a model to be emulated in developing more
pedestrian friendly streets.

It was acknowledged that the entertainment industry has played a major role
in the growth and development of the city and the region over the last century.
With an expanded population of college educated people who have been
exposed to museums and cultural tourism, Eli Broad stressed the magnetism
of museums and concert halls as benefits to local residents as well as to
visitors and convention delegates.

The "haves" and "have nots"

One panelist acknowledged the gap between the "haves" and "have
nots" and the need to create jobs and residences for both classes. The
availability of affordable housing was seen as a necessary corollary.
One of the developers discussed his experience with affordable housing
downtown.

The giants and the dwarfs see opportunities ahead

Although they did not appear on the same panels - the giants spoke of
millions and billions while the dwarfs spoke ot thousands and tens of
thousands - the mega bankers, developers and builders shared common
ground with small scale entrepreneurs in their visions of the continuing
revitalization of downtown LA. Both envision it as a 24/7 city with a mix
of residential and office space, retail commerce, bars, restaurants, and
entertainment.

Evoking the spirit of Jane Jacobs

In the 1960's Robert Moses, the uncontrollable New York developer who left a
mixed record of accomplishments, was opposed by Jane Jacobs when he
attempted to build an expressway that would have bisected Lower Manhattan.
He lost; she won. Her book, "The Death and Life of Great American Cities,"
published in 1961 was a critique of the then current urban renewal process.
She stressed the importance of urban spontaneity where decentralized
ownership stimulates neighborhoods to regenerate themselves through mixed
use and individual entrepreneurism.

Andrew Meiran, owner of the highly successful Edison lounge, who is planning
to both revive and transform Clifton's Cafeteria on Broadway, serves as a perfect
Jane Jacobs' case study. One can predict that his transformation of Clifton's will
have a multiplier effect on Broadway encouraging other entrepreneurs to join
in creating new and innovative enterprises that will breathe life into the whole
downtown area.

One of the speakers said that there had not been a new office building
in LA for twenty-two years. (The LA Live tower contains hotels and
apartment; no office space.) Given the advances in communications
technology, twenty year-old buildings are out-of-date. He promised two
new 60-story office towers in the next three years. There was no mention
of pursuing architectural quality as Eli Broad had said was so important
in planning cultural complexes.

How can we get two office towers that are architectural wonders? 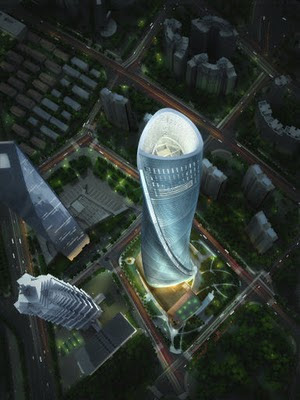 Skyscrapers do not have to be square boxes with glass walls. Shanghai
Tower, above, with 128 floors is approximately 2,000 feet high. It will have
the world's highest open air observation deck, and will house: office space,
a luxury hotel, retail and cultural venues. It is organized as nine cylindrical
buildings stacked one on top of the other. The sweeping design was planned
to reduce the impact of winds often experienced in extremely tall buildings.
Incidentally, this building was designed by Gensler, an American global
architectural firm.

It blows one's mind to think of what is possible. The two towers could be
self-sustaining green buildings generating their own electrical power
with solar panels and turbines. They could recirculate their waste water.
There could be year round gardens on terraces supplying fruits and
vegetables to the building's restaurants. Tenants would flock to such
buildings. People would travel from around the world to see them. The
media would find them endlessly interesting providing LA with a positive
image whenever they are mentioned.

Given the fact that developers and real estate interests will be calling the
shots regarding the design and construction of the two new 60 story towers
being planned for Downtown LA, they should be encouraged to accept
community input. I recommend an international design competition
administered by the CCA. Will the CCA do it? If not, someone else should.

Once again, there is a New York precedent worth examining. The Lower
Manhattan Development Corporation organized an international design
competition in which architects and teams of architects prepared proposals
for buildings to replace the World Trade Towers at Ground Zero. The Port
Authority of New York and New Jersey owned the property and the developer,
Larry Silverstein, was responsible for construction. These proposals influenced
the final design for One World Trade Center, Freedom Tower.

Eli Broad, if willing, would be the perfect chairman for an international design
competition committee. He would have no problem finding qualified members.

The CCA is at bat. For those of us who live here now and for future generations, they need to hit a home run.

P.S. I hope that I fulfilled my promise at the beginning of this post.


Posted by Allon Schoener at 9:49 AM 2 comments

Having lived in LA for nearly 8 months, I have been waiting for
" a world class museum experience." On Monday, September 27,
the hottest day (113 degrees) on record, I went to the Getty Villa.
My wish was fulfilled. 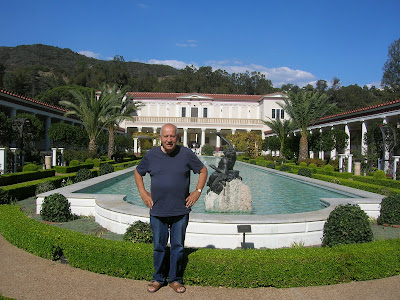 Although The Metropolitan Museum http://www.metmuseum.org/
is my all time favorite encyclopedic museum, the Musei Capitolini,
designed by Michelangelo in 1536, located in Rome's Piazza del
Campidoglio, offers a special attraction on a personal level. 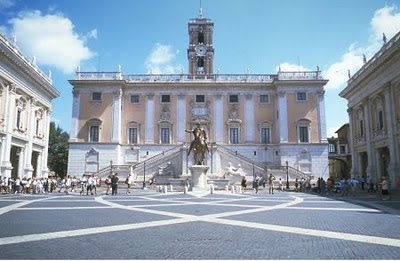 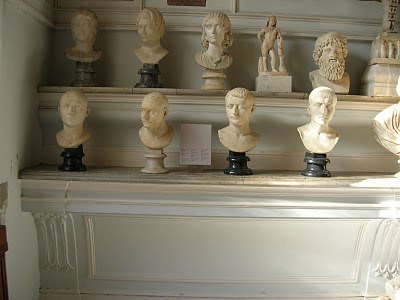 I am standing alongside the portrait bust of an unidentified
Roman citizen, dated First Century AD. For those who believe
that as individual embodiments, we have experienced multiple
lives, this comparison serves as testimony.

So, what does this have to do with my recent visit to The Getty Villa?
I view the Getty Villa, not as a unique experience, but as one episode
of an extended continuity.

Many years ago, I was in LA for an American Association of Museums
annual meeting, and visited the J.Paul Getty Museum, as I believe it was
then called. My recollections are of a less sumptuous historical recreation
with fewer objects on display. This four-part video tour in 1985 by my
friend, Professor Bernard Frischer, describes it as I recall it then.

Now, one finds an extraordinary collection of Greek and Roman objects
displayed impeccably in elegant galleries of varied dimensions. One cannot
fault the Getty Villa staff on any level of professional presentation; however,
in the area of personal taste, I find the new installation of the Greek and
Roman galleries at The Met, renovated under the watchful eye of Carlos
Picón, Curator in Charge, Department of Greek and Roman Art, to
be more to my liking. 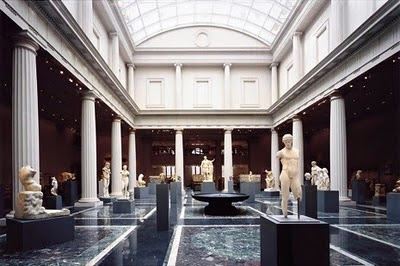 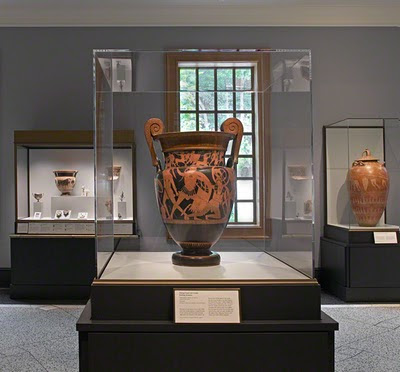 Overall, the Getty Villa offers distinct advantages as an experience. It is
not a museum where objects are assembled and displayed as cultural trophies.
It is the recreation of an authentic Roman villa in a physical setting which
provides a simulation approximating the original experience. Artifacts
displayed here acquire an authenticity that can never be achieved in a traditional
art museum.

In ancient Roman times the Bay of Naples hosted a colony of villas which
served as playgrounds for the rich and powerful much as the area surrounding
the Getty Villa does now. For the Roman aristocracy, these villas served as
the settings for extravagant displays of conspicuous consumption and refined
living embodied in eating, drinking and philsophizing.