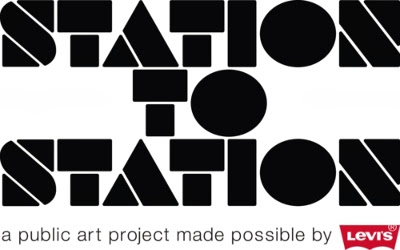 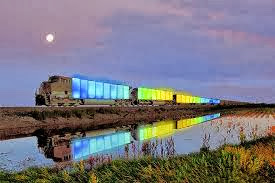 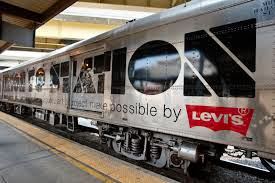 It is with both admiration and envy that I approach Doug Aitken's "STATION
TO STATION: A Nomadic Happening." I think that it is remarkable that he was
able to pull it together and to pull off a project of these dimensions. That he
managed to assemble vintage railway cars, orchestrate a functional itinerary with
events en route, and managed to find a sponsor to foot the bill, I find this not only
to be impressive, but inspiring. Unfortunately, I was unable see an event; however,
I have read detailed descriptions and have seen innumerable videos, so I can
formulate a very good sense of what occurred in some locations and how the melange
hung together.

What can one say about the actual and potential audiences for these events. Clearly,
STATION TO STATION and its associated events were targeting a young "social
media oriented" audience.That Levi Strauss, a supporter of many emerging art events,
sponsored it, made all of it happen. Below are their press releases.

Station to Station: A Nomadic Happening
LOS ANGELES AND SAN FRANCISCO – Artist Doug Aitken today announced his newest project, Station to Station: A Nomadic Happening that will connect artists, musicians and creative pioneers with diverse communities, pushing art and culture outside of institutional constraints. A public art project made possible by the Levi’s® brand, Station to Station will raise funds through ticket sales and donations to support non-traditional programming at seven partner museums around the country.
Over the course of three weeks this September, a train will travel from New York City to San Francisco, making ten stops along the way. At each stop, Station to Station will curate leading figures from the art, music, culinary, literary, and film worlds for a series of cultural interventions and site-specific happenings.  The Aitken-designed train turned kinetic sculpture will act as a cultural studio — globally broadcasting unique content and experiences from the stops as well as on the moving train.  Long after departing the last station, Station to Station will leave an indelible creative mark on its local and global audience—opening eyes and shifting perceptions.
Artists scheduled to collaborate to bring Station to Station to life include Kenneth Anger, Olaf Breuning, Peter Coffin, Urs Fischer, Meschac Gaba, Liz Glynn, Carsten Höller, Christian Jankowski, Aaron Koblin, Ernesto Neto, Jack Pierson, Stephen Shore, Rirkrit Tiravanija, and Lawrence Weiner; musicians Ariel Pink, Charlotte Gainsbourg, Dan Deacon,
David Longstreth of Dirty Projectors, Eleanor Friedberger, Nite Jewel, No Age, Savages, and Twin Shadow; writers Dave Hickey, Barney Hoskyns, and Rick Moody; and chefs Alice Waters and Leif Hedendal, and the Edible Schoolyard Project. More participants will be announced throughout the summer.
With funding for cultural programs and the arts increasingly compromised, Station to Station will establish a revolutionary endowment model to address this need. Station to Station will distribute funds from ticket sales and donations among its partner institutions to support programs and exhibitions in 2014 that embrace Station to Station’s pursuit of new artistic models and creative collisions.
Station to Station is being made possible by the support and collaboration of the Levi’s® brand.  For more than 140 years, the Levi’s® brand has been equipping pioneers with the clothing they need to “Go Forth” and change the world.  Yesterday’s pioneers explored on a journey from east to west, laying the tracks across the original frontier.  Today’s journeys are measured in ideas, not miles. History has shown that through collaboration of a few we can inspire action among many. Station to Station brings this spirit of collaboration to life and invites Levi’sfans around the globe to take part in a new exploration of the modern frontier.
Station to Station has the support of a wide range of institutions. 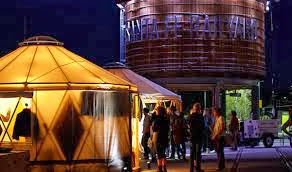 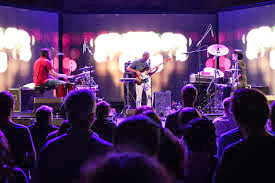 Although this might be a minor point, I question calling this event a "Happening." Today,
I received two email program annoucmenets where the events were described as "happenings."

Aitken points out that Happenings originated in New York's Sixties art world. Perhaps Aitken is expressing nostalgia for that bye-gone era? Having been an active player in that scene, I would suggest that he adopt "After Happening" to describe this type of event and to distinguish it in time and place. 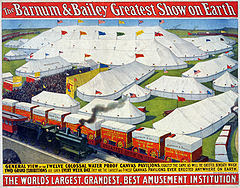 Originated in 1875, the "Barnum and Bailey Greatest Show on Earth," was first called
"P.T. Barnum's Great Traveling Museum, Menagerie, Caravan, and Hippodrome."
As seen in the above poster, everything was transported by rail cars and erected on
on site. Unfortunately, this circus no longer performs in tents. According to The
Huffington Post, there are fourteen extant circuses, most of which perform indoors in
auditoriums.

Prior Transportation Based Exhibitions / Events

Had anyone done anything like STATION TO STATION before?  The answer is "yes."
Transportation based exhibitions, different in content and presentation, occurred
in the 1940s,  I960s, and 1970s. These projects were as much of their time as is
STATION TO STATION a product of today. Their focus was on social and cultural
history along with contemporary art. They were sponsored by federal
and state agencies. I was involved in some, not all, and will review them.

Created as a Post-World War II patriotic gesture, with original versions of the
Declaration of Independence, U.S. Constitution, and Bill of Rights, it visited
300 cities in all of the then 48 states. 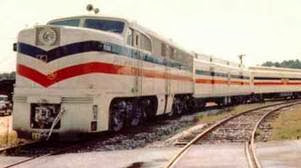 Planned as a Bicentennial event, there were 10 display cars with diverse
historical exhibits. During a 21-month period, seven million visitors
were recorded. 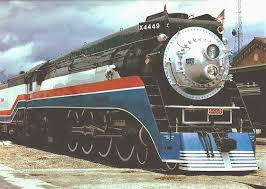 Erie Maid, 1967
As a staff member of the New York State Council on the Arts, I created an exhibition
on a barge, Erie Canal 1817-1967, documenting the canal's history. We called it the
"Erie Maid," after a notorious Syracuse burlesque queen of the 1880s. She became
our symbol and everyone who volunteered received a large button with her image.
The exteror of the barge was designed by George Nelson. He was responsible for
the design of major exhibitions in this country and abroad. Today, he is known for
his Herman Miller furniture designs, 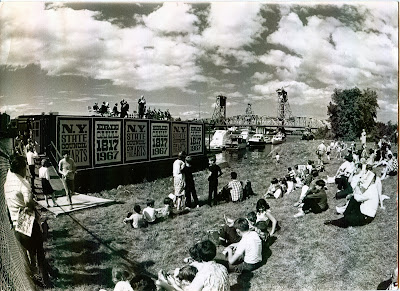 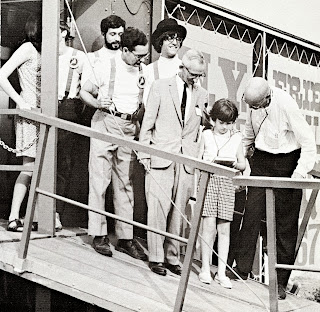 Top: Erie Maid on the canal. Middle: An event in Albany on the
Hudson River. We used the roof of the barge as a performance
stage. Here, Pete Seeger is singing. Below: 100,000th visitor.
Right below: In the exhibition area.

Between July 1, and September 17, a total of 138,250
persons visited the barge. averaging 240 per hour.
These attendance figures exceeded those of many
Upstate New York museums.

After having visited many of the towns along the
canal, Ken Dewey, a New York-based Happenings
artist, planned the itinerary. He found that each stop
offered different potentials. In some towns, we had
marching bands greet the barge. We always had
local volunteers serve as a welcoming committee.
There were folk singers, barbecues, dances and film
showings.

The operating philsophy was simple. We provided
a catalyst encouraging people to celebrate themselves.
Needless to say, that was the spirit of "The Sixties."
Somehow or other, that participatory spirit might
be extended to embrace social media - today's
governing principle. 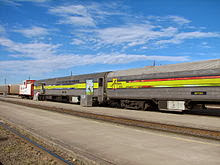 Artrain began in 1971 as a project of the "Michigan Council for
the Arts," and initially toured Michigan, visiting small towns
that did not have their own museums.

It left Michigan for the first time in 1973. Currently, it visits
different regions, returning to that region once every four years.
It is on tour eleven months of the year, traveling about 12,000
miles annually. Ann Arbor, Michigan, is its home base. There,
the cars undergo maintenance, and the exhibit might be changed
if required.

Smithsonian Institution, Planning for the 1976
Bicentennial

In 1972, I was hired by the Smithsonian to develop National
Bicentennial programs. Full of enthusiasm and seeing endless
possibilities, I allowed my imagination to run wild. I was working
for The Feds; Nixon was President; the war in Viet Nam was in
full swing. I envisioned my assignment as being in the wake of
the 60s when anything seemed possible.

So, I canvassed Washington for opportunities. I wanted to
replicate the success of the Erie Maid across the country.
The formula would be the same, Develop catalysts and make
them available to unlimited audiences across the country.
Given a spark of incentive, I knew that people would develop
their own celebrations.

I went to the Pentagon to see about getting cargo planes to drop
off prepared exhibitions at domestic airports. I went to the
railroad association to see about getting empty freight cars to
house prepared exhibitions. Hopefully, we would be able to
park these freight cars at safe, accessible sites, possibly in
accessible freight yards. I went to the trucking association
with a similar request for trailers. Wherever I went, everyone
was interested, and in most cases, they were willing to donate
their services. However,  as with everything, there were associated
costs for personnel, fuel, supplies, etc. I developed a detailed
budget to accompany my auspicious plans.

To transform the cargo area of huge planes
and railway freight cars into informal mini-
museums, I developed "Information Core"
exhibitions. The would serve as catalysts
to activate community response. Information
Core exhibition would be dedicated to a specific
subject. Users would be encouraged to add
artifacts, additional panels, as well as
appropriate sound and images.

Multiple versions of Information Coare
Exhibitions were later produced by the
Smithsonian and distributed widely to
museums, libraries and educational
institutions.

When I made my presentation of the board of trustees of the
Smithsonian, S. Dillon Ripley, one of the most imaginative and
charismatic Secretaries of the Smithsonian to hold that office,
chaired the  meeting. The room was filled with august looking men:
business tycoons, politicians and what might appear to be some
ordinary people. They listened politely and did not ask any questions.
My proposed budget was in the neighborhood of $3,000,000, a lot
of money then. Mr. Ripley looked me straight in the eye and politely
said, "You are asking for the equivalent of our annual Congressional
appropriation. If we go to Congress with this request, and they
approve it, they will cut the budgets of all of our other programs
to make an adjustment." End of story!