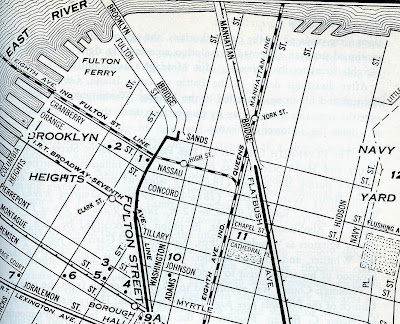 "FULTON FERRY a waterfront hamlet in Brooklyn's earliest days,
is now an isolated sector of musty, dilapidated buildings nestling
in the shadow of the Brooklyn Bridge" 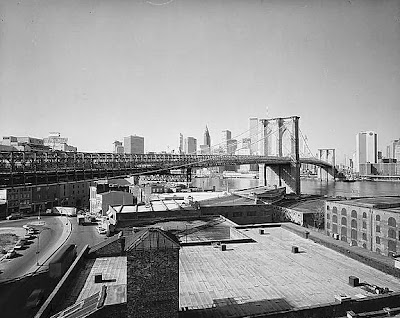 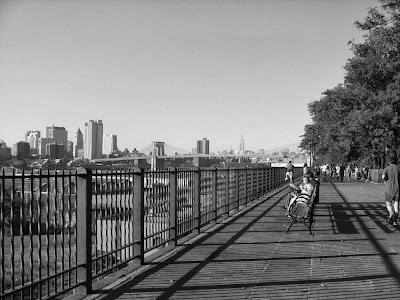 I have known the Brooklyn waterfront from Atlantic Avenue to
the foot of the Brooklyn Bridge since 1943. Once, it was a
thriving port area with cargo ships loading and unloading as well
as the terminus of barges conveying railway freight cars from
New Jersey across the East River. The areas most remarkable
architectural feature was a group of brick Civil War era brick
warehouses. (Seen in the first photo above.) Long gone, there are
similar extant brick Civil War era warehouses ("stores") to be
found in Red Hook, Brooklyn. On several occasions, I walked to
the foot of Joralemon Street hoping to get closer to the water's
edge, but access was restricted. When container ships began
to dominate international trade, the piers and their attendant
warehouses were abandoned. 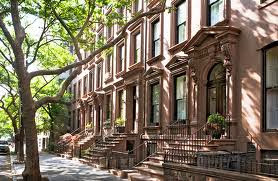 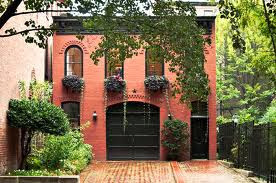 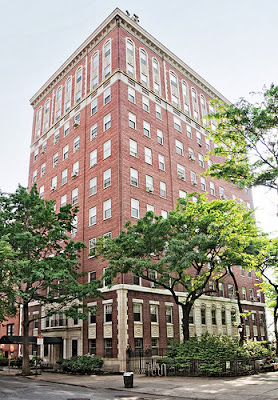 When the Brooklyn Heights Promenade (occupying a platform
above the Brooklyn-Queens Expressway) was completed in
1951, it added an incredible amenity to the neighborhood
providing a one-third of a mile longitudinal park affording
spectacular views of
Lower Manhattan.

"The Promenade, as it is known locally, is a fringe benefit
from the construction of this section of the Brooklyn-Queens
Expressway ... one of the few brilliant solutions for the
relationship of auto, pedestrian and city - was projected
from the crest of the Heights to overlook the harbor at a
fourth level, over two levels of a highway and a service
road for the piers below."

"Brooklyn Bridge Park is a world-class waterfront park with

rolling hills, river front promenades, lush gardens, and
spectacular city views. The park currently features sand
volleyball courts, running and bicycle paths, a boat launch
for non-motorized boating, several playgrounds, a picnic
area, as well as a dog-run and pool. Our list of amenities
continues to grow as we work each day to revitalize this
previously deteriorated waterfront space and build a park
that will allow New Yorkers to rediscover the waterfront.

"Brooklyn Bridge Park partners with Brooklyn Bridge Park
Conservancy to provide a programming schedule that
contains over 400 free activities throughout the year
ranging from children’s education programs and bike
lessons, to performing arts and fitness classes.
Whether seeking a day of physical activity or simply
relaxing on our lawns, Brooklyn Bridge Park has something
for everyone." 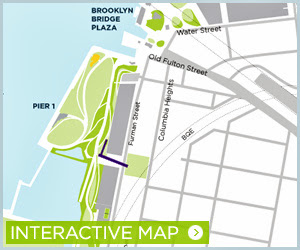 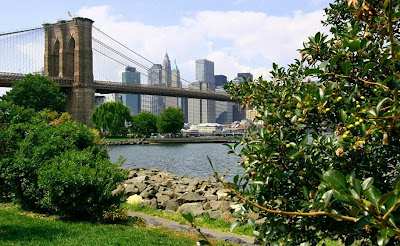 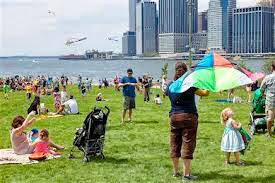 
Undoubtedly, The Promenade set a standard of imagination
and environmental design to be matched by new amenities
introduced to the neighborhood. When I made my first visit
to the yet-to-be-completed Brooklyn Bridge Park recently,
I would say that this objective is clearly in the process of
being completed.

Recently, I walked from the foot ot Atlantic Avenue to the
base of the Brooklyn Bridge. I found completed recreational
areas surrounded by some construction. The promise of a
spacious, user-friendly, well-designed urban recreational
space was evident. All of those who contributed to this venture
should be congratulated. 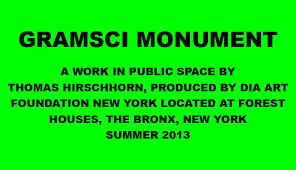 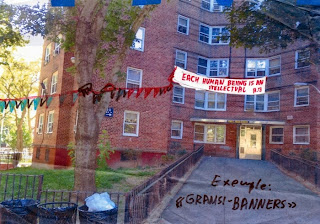 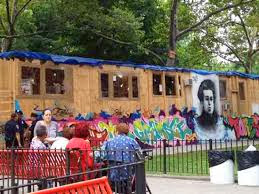 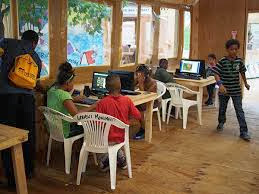 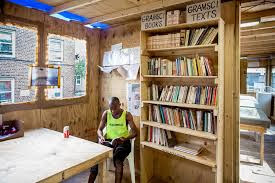 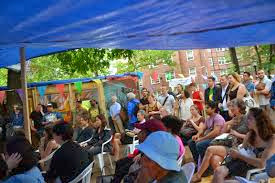 On a Saturday afternoon in mid-September, we took the #5 subway to Prospect Avenue in the South Bronx and proceeded to walk North on Prospect Avenue to 163rd Street. After crossing Union Avenue, we turned right on Tinton Avenue and gained access to Forest Houses, a Post World War II public housing project. My friend, who encouraged me to go, had read a laudatory review in the New Yorker which described the Gramsci Monument as a must see art event. Sponsored by the Dia Foundation, it was billed as a significant work of art by a heralded Swiss artist.

So, what did we find? I would describe the ramshackle wooden structures that appeared
to be the core of the project as an insensitive intrusion into the courtyard of a low-income
public housing project. There was a library, radio station and a bank of computers
linked to the internet. Where and how did Gramsci fit into this mess? Searching for some documentation, I found a faded typed biography on an 8 1/2 x 11 sheet of paper tacked to
a wall. There was one in English and another in Italian.

Was this a bad joke? No, this was supposed to be a serious work of art. As I wandered from one tacky space to the next, I tried to image who was the so-called artist who had conceived of this entity and why it was sponsored by the Dia Foundation. Beyond that, I was compelled to ask what it had to do with Antonio Gramsci. Although I had not read him widely, I knew that he was the patron saint of left-wing Italian politicians. I kept asking myself what Gramsci had to do with this public housing project in the South Bronx.  Simple: Thomas Hirshhorn, the Swiss artist who had conceived this project, was enamored of Gramsci. Concurrently, I wondered if Gramsci had any relevancy for the residents of Forest Houses. My assumption is none.

I had an opportunity to talk to one of the residents who had established a table along the main pedestrian pathway where she was selling objects that she assumed might appeal to
tourists visiting her neighborhood. She appeared to have little interest in the content of
this so-called work of art finding it to be a positive element in her community because
residents were compensated for working on the construction of its various elements.

As we wandered around this desultory organized phenomenon, we came upon an open-air
theater with about two hundred mostly middle-aged Caucasians seated in a semi-circle
listening to an African-American man promote his book describing his experiences
with the ANC (African National Congress) in South Africa. It did not appear that many,
if any, project residents were in the audience.

We began to talk to three people, two women and a man, in their late twenties or
early thirties, obviously not from the neighborhood. I asked what they made of this
so-called work of art. They, too, were motivated by the "must see"  New Yorker
article saying that they believed that the artist was trying to regenerate the participatory
art spirit of 1960's as seen in Happenings where members of the audience were participants
in an art event. Being familiar with Happenings, I could not make the connection.

Although this personal event occurred in 1967, it bears some relevance to the Gramsci
Monument. I had just published a book on the history of New York's Lower East
Side. At that time, it was customary for publisher's to have a book publication party
in a restaurant and  invite critics. I requested that my publisher give me the money
that they would have spent on a lunch allowing me to create an event related to the
book's publication in Seward Park on The Lower East Side. They agreed and I
created a mini-festival on a Sunday afternoon in the park. 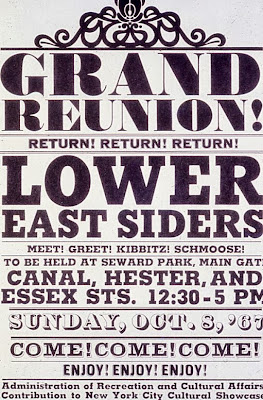 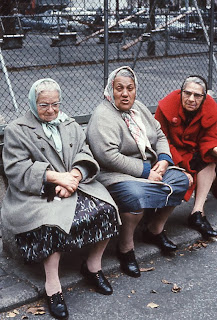 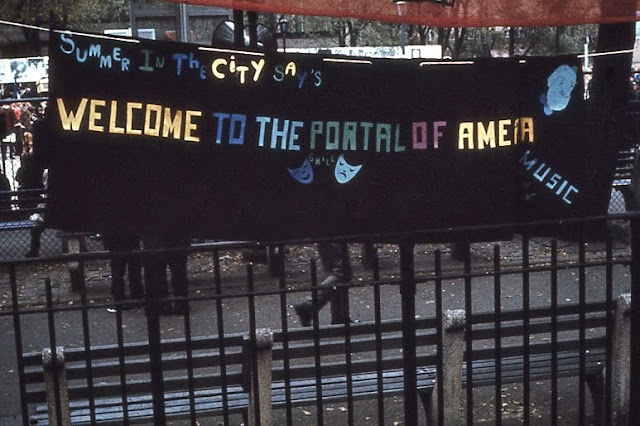 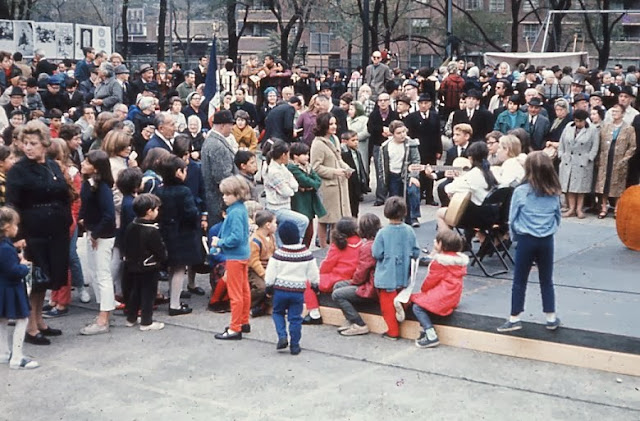 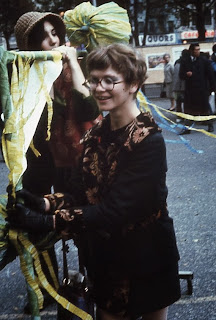 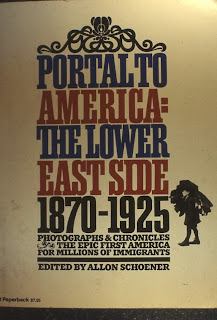 Was my festival in Seward Park a manifestation of cultural imperialism? Definitely not!
It was an honest interpretation of community heritage in which the history of its residents
was celebrated. Since The Lower East Side was then becoming a hip neighborhood, we
had a "slum goddess" parade. (See photo on left immediately above.) Now, there are
hundreds of neighborhood block parties throughout all of the boroughs in which residents
celebrate their origins, history, heritage, religion and food. They are authentic community
events.

Thomas Hirshhorn could benefit greatly by visiting some of these neighborhood block
parties. He might learn how (if he were so inclined) to contribute to a community rather
than exploit it for ego gratification and personal gain.

By now, the Gramsci Monument is a memory. On reflection, I would describe it as a
gigantic hype involving a colossal waste of time, energy and money. Hopefully, Thomas
Hirshhorn will restrain his cultural imperialistic ventures and avoid invading innocent communities.