The Birth, the Death and the Rebirth of Mass Transit in Los Angeles

The Birth
"Los Angeles County has been served by public transit since 1873. During this time, at least 220 private and public companies have operated transit systems that have included horse cars, incline railways, steam trains, electric street cars, interurban cars, trolley busses, and gas or diesel busses."
METRO LOS ANGELES TRAVEL HISTORY
http://www.metro.net/about/library/about/home/los-angeles-transit-history/
Surface transportation networks totaling more than 1,000 miles were built. As in other American cities, public transportation entrepreneurs such as Henry E. Huntington, patron of the arts, were also real estate developers. He purchased undeveloped land, introduced electrical power and built homes which contributed to an evolving suburban Los Angeles.
http://en.wikipedia.org/wiki/Henry E Huntington
Below is a map of Huntington's Pacific Electric Railway interurban transportation system plus a photograph of one of its iconic "red cars" that carried passengers and freight from one end of Los Angeles to the other. It was the armaturee of the region's growth. 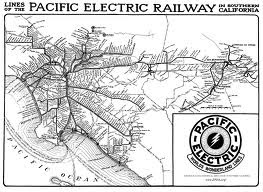 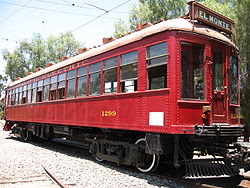 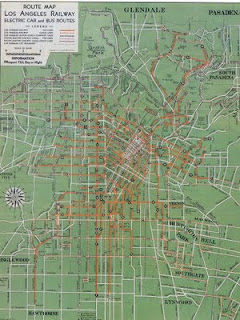 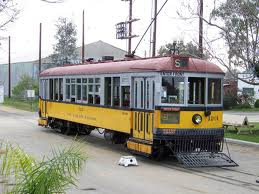 The "yellow car" trolleys were gradually replaced by busses; the last streetcar went out of service in 1963.

Although Los Angeles might have been able to boast boast that it had created one of the nation's most effective public transportation systems, by the mid-1950s, it was seen as garbage. Below is a view of the giant National Metals and Steelscrap yard on Terminal Island in Jim Walker's 1957 photo. 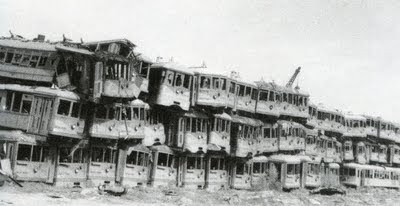 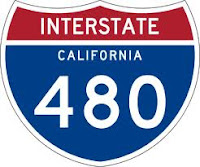 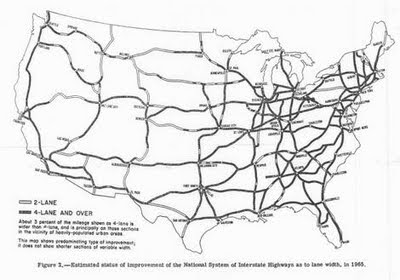 Post World War II America was intoxicated with freeways. Armed with eminent domain, transportation planners reinvented this country with asphalt as its king.Implicit in this evil scenario were the commanding forces of the automobile industry, the petroleum industry and the automobile tire manufacturers. The Interstate Highway System was sold as providing "national defense" should the Soviet Union invade. President Dwight D. Eisenhower championed this effort and his name was attached to the highway system.

Los Angeles's suburban "car" culture was promoted as the wave of the future for all of America.Over the next thirty years, freeways and suburban developments transformed the American landscape: urban and rural. Viable city centers were eviscerated with expressways; farmlands were bulldozed into a monoculture of suburban housing developments interspersed with shopping malls. 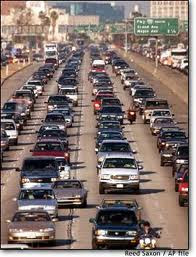 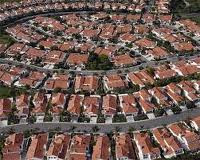 Above: A Los Angles freeway. Below: A Los Angeles suburban housing development.
The Rebirth / Chapter One


Although it might be difficult to prove any direct connection, there was a rising environmental consciousness drifting across America in the 1960s and 1970s. As a result of the Sierra Club's success in blocking the Bureau of Reclamation's construction of two dams in the Grand Canyon, "the environment" became a buzz word. In 1963, the United States Congress passed the Clean Air Act; it was subsequently amended, and in 1977, Congress passed the Toxic Substance Control Act.
In l976, the California State Legislature enacted Assembly  Bill #1246 creating the Los Angeles County Transportation System Commision to oversee public transit and highway policy. It is credited with the construction of the Metro Blue Line, Metro Red Line, Metro  Green Line and Metro Gold Line. Metrolink began operations in 1992 through partial funding from LACTC.

In 1993, the State implemented a merger of the SCRTD and LACTC, to form the current organization, LACMTA, Los Angeles County Metropolitan Transportation Authority. Bits and pieces of a regional transportation grid began to emerge, See map below. (It can be enlarged by opening the link.) 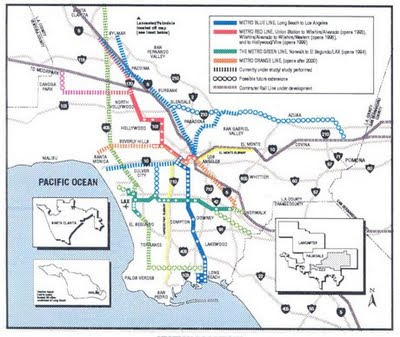 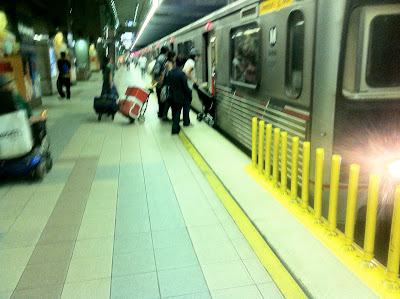 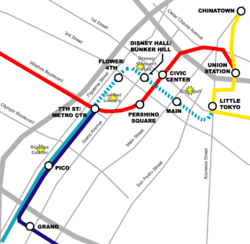 Ostensibly, transportation improvements might appear to be on autopilot; however, this is hardly the case. The economy, local, regional, state and national politics will all have their impact. In 2007, Move LA, an organization dedicated to supporting local transportation initiatives, built a coalition of business, labor and environmental organizations to identify and secure new funds for transportation investments in Los Angeles County. A January 2008, a Move LA conference served as the launching pad for Measure R, a one half cent sales tax that would provide $40 million for transportation projects in Los Angeles County over the next 30 years.  In November 2008, Los Angeles County voters approved Measure R with a 67.22% margin, a hair above the California State requirement of 2/3 support for new taxes. Mayor Antonio Villaraigosa championed this initiative and has emerged to play a leading role in national transportation policies.

Move LA spearheaded the National Infrastructure Development Bank and its associated 30/10 Plan which could lead to the completion of all Los Angeles' 12 Measure R transit projects in 10 years rather than 30 years. Mayor Villaraigosa and his staff, working with Metro staff, refined the program into a legislative package known as Move LA's 30/10 Plan. Subsequently, this plan was endorsed by Senators Boxer and Feinstein, the LA Metro Board and Richard Trumka, President of AFL-CIO, among others. An innovative funding methodology emerged. Rather than wait for Federal grant monies which might or might not be delivered, Move LA conceived of a plan to obtain credit assistance and tax code incentives which reduced the cost of borrowing and accelerated the delivery of construction funds.

On June 21, I attended Move LA's all-day conference, "A Bigger Vision: Moving LA Fast Forward." The breadth of participants was staggering: local, state and regional transportation, local, state and regional government, business, labor, environment, housing, bicyclists, and neighborhood leaders. It was clear that everyone shared the same objective: to accelerate the construction of LA's much needed transportation projects as rapidly as possible.

Implementing these mass transit objectives is critical to the future of Los Angeles. As the world continues to become increasingly urbanized, Los Angeles must be remain competitive.

The above diagram indicates world population growth between 1950 and 2005. During this period, the world's population tripled reaching 3.15 billion. Cities in the developing world are growing rapidly. By 2020, 77% of the world's population is expected to live in cities in developed countries. Individual mobility demands can be satisfied most efficiently in urban areas. The Los Angeles expanding transportation system is going to assist this region in coping with the demands of increasing new populations as they arrive.

Getting back to Move LA's all-day conference, LA Metro CEO, Art Leahy, said that the had taken the Gold Line from Pasadena to Union Station and walked up the Temple Street hill to Cathedral Plaza, the site of the conference. I, too, took the Gold Line to Union Station, transfered to the Blue Line and got off at City Hall. Then I walked up Tempe Street hill. As I walked, I did not find any compatriots. I saw a continuous line of cars entering the Cathedral parking garage. At the Move LA conference, I wanted to ask if anyone else had taken public transportation; however, I was afraid to raise the issue for fear of injecting a dissident note because it was apparent that few had.

Then, I saw Green T - Tamara Henry, with her large red STOP sign describing her 1hour and 35 minute bus ride from Venice to Downtown LA,  She made the point much more effectively than I could. 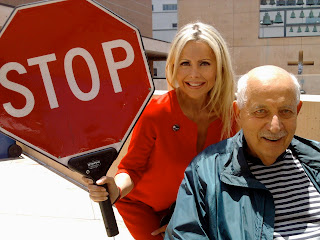 As the conference ended, I was walking down the stairs with LA Metro CEO, Art Leahy, and told him how much I liked the LA subways because they reminded me of New York. He said, "I hate New York!"
Posted by Allon Schoener at 3:04 PM 0 comments