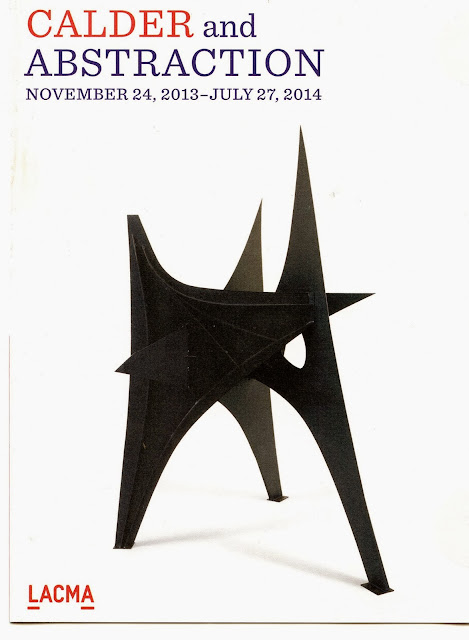 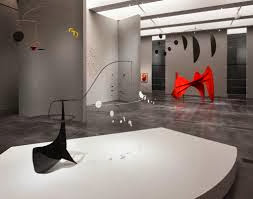 Since arriving in Los Angeles in January 2010, my visit today to the current
Alexander Calder exhibition at LACMA was one of the  most satisfying museum
experiences that I have had here. It is a combination of great art presented
intelligently in a well-designed and sympathetic environment. Stephanie
Barron of the LACMA staff was curator and Frank Gehry was exhibition
designer. With approximately fifty works on display, it offers an abbreviated
presentation of this artist's work. It does not purport to be a retrospective
and draws heavily on the Calder Foundation http://www.calder.org
for loans. 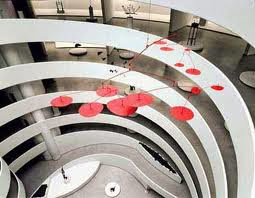 In 1964, I had the good fortune to attend the opening of the
Calder retrospective at the Guggenheim Museum in New
York organized by James Johnson Sweeney, a long time
champion of Calder's work. Without question, it was an
incredible experience to see Calder's work in this setting.
To my eye, the museum never again looked so good. I
doubt that there has ever been an exhibition presented
there that was more compatible with the space. Calder
was present and very much in evidence.

Before the Guggenheim was completed, I had interviewed
Frank Lloyd Wright asking him how it was going to be possible
to display art on curved walls. He replied, "That is not my
problem." I don't know if he was ever able to see the Calder
show. If he had, I am certain that he would have rejoiced and
agreed that the space was ideal for Calder's work.

It is questionable that either Stepanie Barron or Frank Gehry saw
the Guggenheim retrospective. No matter. On entering their exhibition,
I said, "This reminds me of the Guggenheim show. The curved surfaces
and alcoves provide a perfect setting for the mobiles to float in space,
focusing on them as objects and denying the presence of competing
architecture."

The Guggenheim show was a retrospective. Consequently, one saw
Calder's work in depth and multiplicity. Calder's "Circus" a seminal work
was situated in the first floor niche. If I recall correctly, it was operating on
opening night. Therewere multiple examples of stabiles and mobiles covering
an extensive span of time. It was possible to witness the evolution of his
from intimate to monumental.

Paris in the 1920s was the innovative center of the then international art world.
Calder was there for an extended period of time having made contact with some
of the major figures: Duchamp, Miro and Mondrian among others. There is no
question that their work had a significant impact on him. However, this in no way
can detract from the originality of his creations.

Fortunately, this exhibition is not overloaded with gimmicky technological wonders
that are purported to enhance the visitor experience. The focus is on the art itself
and the design of the space complements that objective. There is an extensive
catalogue which I am certain provides a considerable amount of elucidating information.

I resisted buying one because I have The Museum of Modern Art's book on Calder by James Johnson Sweeney published in 1951 - for which I then paid $3.00.

This LACMA show confirms Calder's association with the museum
since 1964 when Three Quintains (Hello Girls) was installed in the garden.

Below top: Calder supervising installation. Below center: Poster designed
by Calder for the opening of the museum. Below bottom: As seen today,
fully restored. 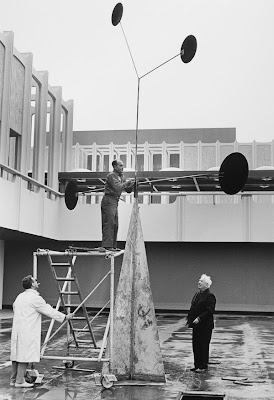 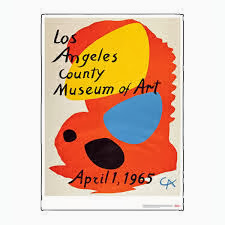 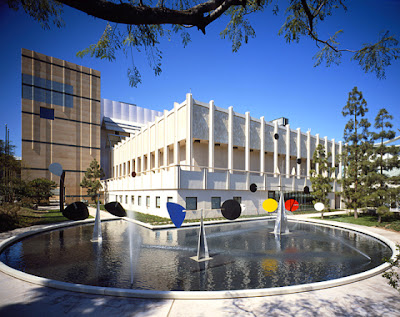 Regrettably, there have been problems accompanying the continuing display of this work.

"Commissioned by a women's museum-support group when LACMA first opened on Wilshire Boulevard 44 years ago, the Calder was one bit of proof that digging a fountain into the La Brea tar pits could be a problem. Oily black ooze kept gumming up the works, and the reflecting pools that surrounded the new museum complex were eventually drained. The sculpture was moved into storage and then onto dry land, where the revolving paddles regularly got stuck in surrounding evergreens. For a while in the 1980s it was lent to Art Center College of Design in Pasadena. Finally it went back to LACMA and into a new pool. Still, the wind-and-water-sensitive sculpture didn't work quite right.
Actually there was a bad omen for the piece right from the start. Calder (1898-1976) came to Los Angeles to install the $30,000 sculpture (about $200,000 in today's currency) in December 1964; but the van that drove the work from the artist's Connecticut studio had problems and ended up in a storage barn. The sculpture, composed of three triangular bases with carefully balanced metal arms and paddles, was packed all the way in the back and couldn't be unloaded. Calder cooled his heels while a scheduled press event went on using only a model for the sculpture.
Now, according to LACMA's blog, Unframed, the water circulation issues have been solved. Next up: a paint job for the paddles, which should be vibrant red, yellow, blue, black and white but are currently somewhat faded."
The pool is at the southeast corner of the Leo S. Bing Theater, just to the right of the museum's east entrance on Wilshire Boulevard at Spaulding Avenue. See it before the purple jacaranda blossoms get into the recirculating system.
- See more at: http://latimesblogs.latimes.com/culturemonster/2009/05/calder-lacma.html#sthash.sgxWkDVO.dpuf