Los Angeles, "A City of Fakes" Having lived in LA for three years, the character of the city continues to evade me. I expect to find something with which I am familar in other cities. Not so. On February 2, 2013, I attended a program hosted by the Photo Friends of the Los Angeles Public Library,  "A City of Fakes," which began to unravel this mystery for me. I quote from the program announcement. "Most cities build monuments out of stone. Los Angeles builds them out of fantasies. From backlots to theme park, L.A. has long been a city of imaginary worlds. There are Mayan temples that show movies, cruise liners that bottle Coca-Cola and Babylonian palaces that manufacture tires." Presenters, Zed Adams and Eric Lynxwiler provided an excellent, affectionate and thorough documentation of their thesis. I will attempt to offer  a brief summary along with some personal embellishments.

Knott's Berry Farm (See above) calls itself "America's first theme park;" for
Adams and Lynxwiler, it is seminal. They see the entertainment midways of late
19th and early 20th century world's fairs as the progenitors of theme parks and for
them, theme parks have left an unmistakeable imprint on the visual character of the city of Los Angeles.

From my perspective, I do not deny that theme parks and Los Angeles have a symbiotic relationship;  however, I see it a little differently. At the beginning of the 19th century, when the Industrial Revolution was in full swing and transforming cities in  Europe and the United States, a variety of public entertainments were conceived and marketed to both the expanding bourgeoisie and the "unwashed" masses of factory workers populating the new metropolises. Many forms of public entertainment with which we are now familiar (museums, theaters, symphony orchestras, public parks and gardens) were created to entertain the middle and upper classes. However, ubiquitous circuses, vaudeville theaters and side show midways provided entertainments for the lower class multitudes. The term "honky tonk" aptly describes the Paris' Place Pigalle (See first image below) with its army of prostitutes and The Bowery in 19th century New York. (See second image below) were hosts to those seeking thrills and diversions. Guided tours of New York's Chinatown's opium dens were high on the list of entertainments being offered to the haute bourgeoisie. 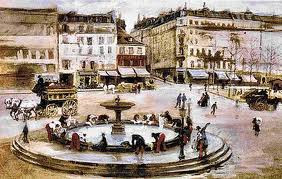 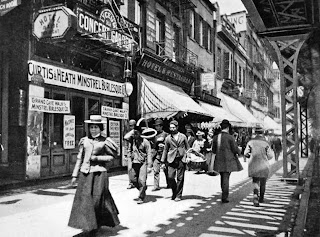 Coney Island in New York (See below) was the prototype of amusement parks across the country with their signature signature roller coasters and parachute jumps. Generally, these amusement parks were located on the fringes of urban centers; the availability of inexpensive mass transit made these amusement parks accessible to the masses.  Urban midways, honky tonks and Coney Islands were enclaves within urban centers manifesting their own ambiance. When you entered their precincts, you were transported to another world. That world had social and psychological boundaries and did not impinge on the rest of the city. 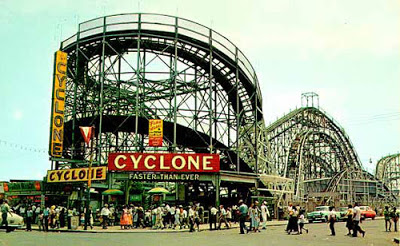 I am going assume, from the perspective of Adams and Lynxwiler, that they saw these amusement parks as being different from those rising in the Los Angeles area. Coney Island was not a theme park; it was a conglomeration of individual enterprises offering distinct experiences.

For Adams and Lynxwiler,  Knott's Berry Farm was seminal in the development of theme parks because it demonstrated that it was possible to attract mass audiences to a world of fantasies.

Although influenced by Knott's Berry Farm and having adapting some of their basic principles to his concept of the theme park experience, they view Walt Disney as the grand master of the theme park world. In the heart of Los Angeles, they cited Clifton's themed cafeterias (See below) as urban domestications of themed environments. What does this have to do with the average Angelenos' views of their city? For them, perhaps the lines of distinction between reality and fantasy were blurred? Adams and Lynxwiler believe that seeing something outrageous in the midst of urban Los Angeles was  neither unusual nor startling for Angelenos. 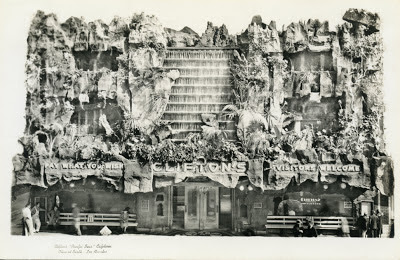 Adams and Lynxwiler reported that the remnants of the set for D.W Griffith's "Intolerance" (See below) remained standing at Hollywood and Highland for two years after production was completed. Today, Hollywood and Highland is a massive entertainment complex of movie theaters, restaurants, bars, gift shops, clothing stores and one of the largest indoor parking garages to be found anywhere. 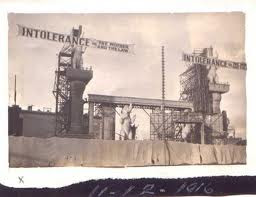 As a current phenomenon, he states that simulation has replaced reality and cites as an example the simulation offered to visitors at the Lascaux caves' site in France. Allowing armies of visitors inside the original caves where ancient paintings are to be found, would destroy them. As a consequence, a replicated visitor experience is offered. (See below) 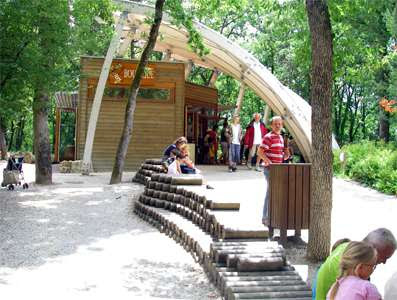 Baudrillard states that most people are as content with the replica as they would have been with the original. Now, there are virtual tours offered on line.

What Baudrillard proposed, offers a methodology for evaluating many current experiences, such as visits to Disney theme parks, where visitors often see the simulations being offered as preferable to the originals.

Hate it or love it, one cannot deny the significance of the Disney theme park experience and its imitators. It has embraced three continents: North America, Europe and Asia.
Not a fan of the Disney experience, I recognize its impact.

I wrote an article for the Arts and Leisure section of The NewYork Times,  that appeared on Sunday, October 30, 1988, entitled:"Can Museums Learn from Mickey and Friends?" I stated that:
"As theme parks encroach upon the  turf of art museums, some museums look to Disney for ways to entertain." I further stated that "... distinctions between museums and Disney have become increasingly blurred - the Metropolitan Museum of Art has replicated a Ming Dynasty Scholar's Courtyard and Disney has built a half scale replica of Beijing's Temple of Heaven ..."

So, what does this have to do with what one sees on the streets of Los Angeles?
LA was Disney's home turf. The Disney way, whether you call it "fakery," "simulation," "entertainment," or "business," has made its mark here. People don't appear to care about the difference between the original and the fake. I doubt that many people have heard of Baudrillard or French post-modernist philosophy; they simply accept what is offered to them as reality and don't question it. An acquaintance told me that she went to France at Epcot, the Disney park in Orlando, Florida. For her France at Epcot was more a reality than the country itself.

Having been inspired by Adams and Lynxwiler, I have created a list of Los Angeles fakes that I have experienced. What are my criteria? Without question, they are derived from my personal experiences in cities like: New York, Paris, London, Rome, Milan, Basel, Bogota, Vienna, Bejing, Zurich and other cities that I know. Here's my list: 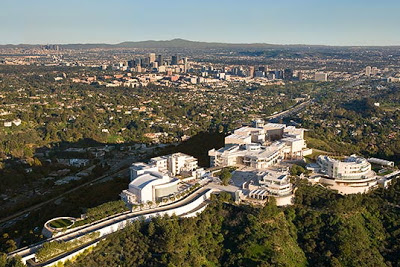 This overwrought marble cultural citadel sits atop a mountain overlooking the Interstate 405 freeway,  one of the busiest highways in the world. Access to the main campus is via a funicular like tram that climbs slowly up the mountainside offering spectacular views of the congested traffic below. I ask myself, is this supposed to be a 21st century (Disneyized) imitation of the Masada Experience in Israel?  http://en.wikipedia.org/wiki/Masada
Masada, the site of a First Century BCE battle between Jews and Romans invaders, is no now reached by a spectacular trip in a cable car that leads to a historic fortress overlooking the Dead Sea. This is reality. 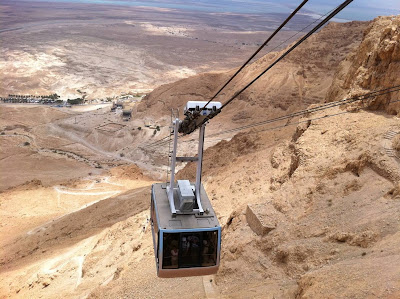 Perhaps more significant is what one sees on arrival at the Getty Center. There is little "art" of consequence to be seen. Not to be minimized, there is an outstanding photography collection. However, in the world of encyclopedic art museums, to which The Getty aspires, the needle hardly moves from zero. Beyond photography, the Getty Research Institute is a humanities library in the making. There are other Getty Foundation programs housed at this campus.
http://en.wikipedia.org/wiki/Getty_Center 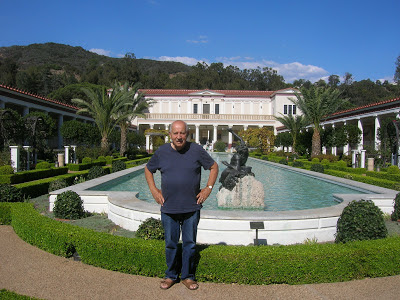 Here we have a fake where fakery is honest and really works. It is like the recreation of a Chinese garden at The Metropolitan Museum in New York. This garden is a simulation of a garden that might have existed in one of the Imperial Roman villas along the Bay of Naples. The villa design was inspired by the Villa of the Papyri at Herculaneum and incorporated additional details from several other ancient sites. There is a collection of dubious merit which is tainted with a long history of trafficking in designated national treasures that were illegal to export.
http://www.getty.edu/art/gettyguide/videoDetails?segid=3729 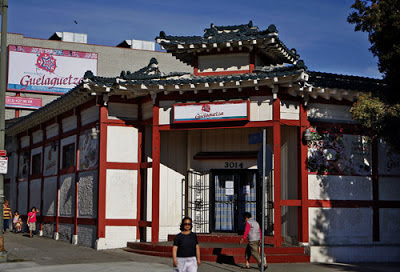 This is a real fake that has no equals. Guelaguetza is located in a former Korean restaurant in Koreatown. The original Korean restaurant replicated Korean architecture.
When the Mexican restaurant occupied the space of the Korean restaurant, the
Oaxacan owners saw no need to change the exterior. Having spent a week in the city of
Oaxaca, I could not detect anything that remotely resembled the food that we had
there and much admired. 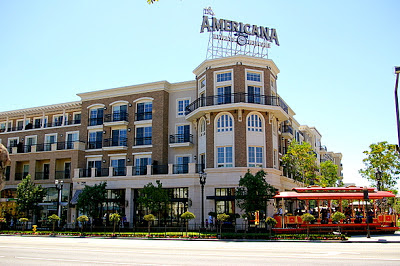 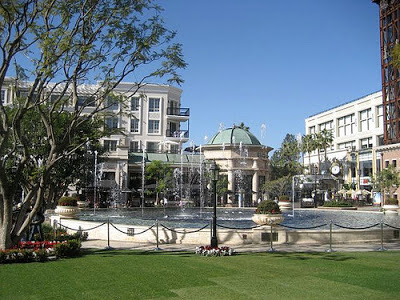 Below is a description of The Residences.


Living in style is more fun than ever at The Residences, The Americana at Brand's collection of 242 luxury apartment homes. Enjoy a vibrant urban lifestyle, plus superb services and designer home finishes that make daily life a pleasure. 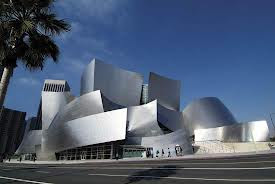 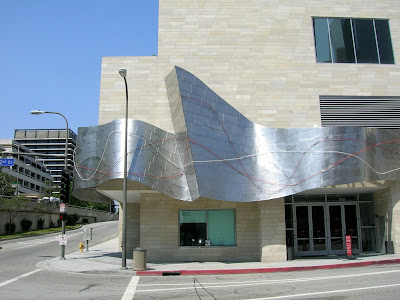 Although much admired, I find something basically dishonest in the use of a flamboyant skin of stressed metal that camouflages a traditional structure beneath it. So, I would describe this as fake architecture. 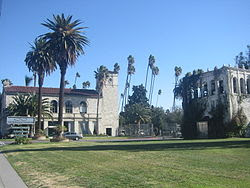 Is this a cemetery or an outdoor movie theater? 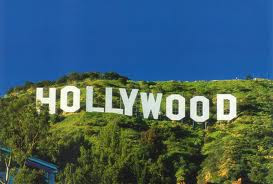 Not a fake in a city of fakes!

The motion pictures industry has been in LA for a century. The studios have been called
"dream factories." I prefer to call them "fake factories." In the 1950s, television shows
were added to their proeduct line. There is no question that a considerable portion of the
Los Angeles population is engaged in "the industry." If people generate fakery as a
profession, they will be prone to accepting it as normality in their everyday lives. Films and
television programs are made in other cities, but those cities do not appear to have been
altered in the same way that it has affected Los Angeles. Rather than speculate on its
origins or its logic, I prefer to accept fakery as a fact of life in Los Angeles.

First below: Paramount Studios at Melrose and Gower. Second below: You Tube /The NBC Universal Studios Experience. 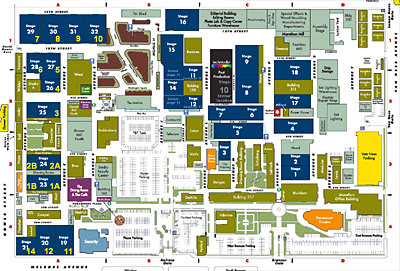 Is Los Angeles more prone to fakes than any other city today?
The boundary between what is fake and what is real has become
a matter of subjective determination. As Baudrillard has indicated,
transference of reality to imitations is endemic in our society as a
whole; however, I have found something different in LA. While
other places might tolerate fakery, in LA, there is a long tradition
of practicing it. In fact, there is almost a worship of it.