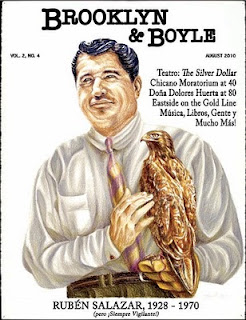 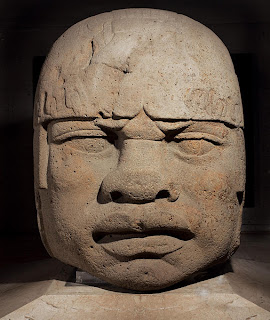 With great anticipation, I am looking forward to seeing
the Olmec exhibition at LACMA. Among what have been
described as Mesomaerican cultures, Aztec, Maya, Mixtec,
Olmec and Zapotec, the oldest is Olmec with roots tracing
back to the sixth century BCE. During my lifetime, I have
witnessed the transformation of Mesomaerican cultures
from the domain of natural history museums to art
museums.

My first contact with Olmec art, this ancient Mexican culture
most notable for its highly developed stone carving technology
producing massive stone heads that have no equal in human
history, occurred when I was a graduate student in art history
at Yale. I had the good fortune to attend a seminar focusing on
the Olmec led by the renowned Pre-Columbian scholar, George
Kubler. As an art historian, Kubler was more interested in a
stylistic interpretation of Olmec culture in which he saw the art
objects as having a life of their own, seeming sometimes to be
devoid of an association with the human beings who created
them.

The Olmecs utilized some of the hardest stones to be found on
this planet: basalt, granite and jade. Kubler marveled at the
incredible technological accomplishment of the Olmec sculptors,
who, like Ancient Egyptians, managed to create sculpture from
blocks of stone without the benefit of metal tools.

Among indigenous American cultures, there were varied writing
systems; however, there were no written languages in the
European and Asian traditions. As a consequence, we know
virtually nothing about the Olmec except the sculptures that
remain. Without a written language or some other method for
recording events, Olmec society remains shrouded by myth
and mystery more than in fact. There is much unresolved
about when and how the Olmec lived, prospered and disappeared.

Other Mesoamerican societies had highly developed glyph systems
which recorded military and political events. Buildings, walls
and stela were inscribed with historical, political and
genealogical information. While there are on-going investigations
of these written glyph systems, the spoken languages of a number
of North, South and Central American indigenous cultures persist.
Bolivia, Paraguay and Peru have one or more official indigenous
spoken languages. In the American southwest, the Navajo language
claims 200,000 speakers.

In Mexico and Guatemala, the Maya retain their cultural identity
and their their spoken language remains functional. While serving
as a consultant to the Organization of American States, I witnessed
the perpetuation of the Maya oral tradition. During lunch at the
home of the leader of a woman's weaving cooperative in Flores,
Guatemala, an elder was teaching the son of our host Ancient Maya
in an adjacent space. Recognition of elders as custodians of oral
tradition, is common in other American, African and Asian indigenous
cultures

On previous occasions, I have seen Olmec sculpture in traditional
museum settings: The Metropolitan Museum of Art, American Museum of
Natural History and National Museum of Anthropology in Mexico City.
I believe that the Resnick Pavilion designed by Renzo Piano will
provide a new and enhanced opportunity to view Olmec sculpture bathed
in natural light. This might simulate the environment in which these
sculptures were created rather than their being seen in confined
traditional museum galleries with artificial illumination. As the
light outside changes, so will the light inside. It promises to be
spectacular.

BBC DOCUMENTARY ON THE OLMEC