ON GETTING INTO LOCAL POLITICS 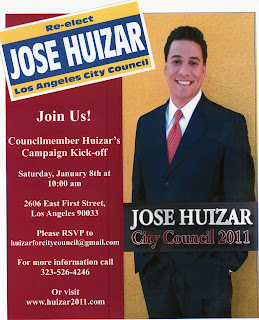 In my blog of August 10, I reported my dialogue with Councilman
Jose Huizar in answering his question about how a transplanted New
York Jew feels about living in a largely Latino neighborhood. Since
then, I have become a Huizar groupie, in the sense that I monitor and
support his neighborhood initiatives which are many.

Although one would hope that Huizar would run unopposed, that is not
the case. He is being opposed by Rudy Martinez of A&E's "Flip this House"
fame.  Martinez describes himself as a "self-made businessman" approaching
the race as an outsider.

I have heard that polls indicate that Huizar is leading by 95%.

Since there are approximately two hundred residents and two hundred
employees at Hollenbeck Palms, I told Councilman Huizar that I hoped
to deliver two hundred votes. Grateful, he said, "That's a precinct."

On January 8, I attended the campaign kick off. It was held in the side yard
of a house that appears to serve as a Democratic Party neighborhood
headquarters. There must have been at least 500 people standing and listening
attentively to a parade of civic officials singing Councilman Huizar's praises.
The audience was primarily Mexican American reflecting the neighborhood's
dominant ehnic group. 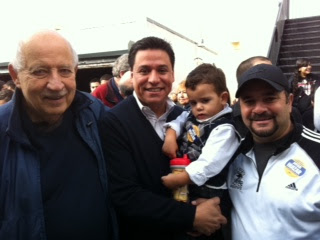 From left to right: Myself, Councilman Jose Huizar, Nissim Leon. 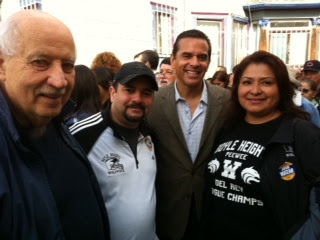 Hardly knowing anyone, I did my best to strike up conversations with
congenial and friendly fellow standees. I met the coach of the local high
school's football team. I met a woman who shared her aspirations of
seeing one of her sons attend an Ivy League college. As I asked another
stranger what he did, he said: "I'm the mayor!"
Posted by Allon Schoener at 11:23 PM